Note that this particular piece is being written long, long after having built it so no in-depth box shots or pictures that further show the massive detail. Anyway! The motorcycle that has more R’s in the name than a goddamn pirate. Well there’s an opener I suppose. Yes, my third, well technically fourth motorcycle kit from Tamiya in a single year. I built the ’18 Kawasaki Ninja H2 early in the year as well but I never really got around to finishing it proper, not after fenagling all those fuckin’ carbon decals onto the front cowl, poorly. This kit, however, I did finish. Albeit in October of last year. I didn’t get around to writing a single word since I’ve been so busy with the decals and day to day life in these damned plague times. This kit, suffice to say, was my autumn break. My little ride to modeler’s paradise where the kits are flawless, affordable, sprues aren’t idiotically designed and everything goes together like a charm. So, you know, basically anything that isn’t produced by Round 2 as of late. Oh yes, I know you’re upset at that particular sentence as I could hear your anuses squeak shut across the Atlantic but you know its true! Over thirty bucks RRP and its unchanged shlock from the 1970s, where the biggest effort they seem to do is making sure the box-art looks good enough to sucker fools in.

Granted, they just announced a brand new tool International truck so, well you know what, fine, you got me there. Shouldn’t require the same frequency as comet Halley for them to do something new with their riches. But anyway, I shouldn’t rag on Round 2 too much as I’m still a faithful demented customer, even at the balls to the walls prices. Punish me, business daddy, I suppose. Anyway, back to the kit in question. Tamiya’s latest kit on the motorcycle front is not only a new tool Honda, its a friggin’ recent one too! There was only give or take 7 months between the Fireblade SP CBR hitting dealerships and Tamiya releasing the kit so there must’ve been some hand-holding or some kind of partnership and you know what, yes to that shit please! It reminds me of the 1990s and before where new vehicles would get a full detail model kit in the same year, heck Revell held that torch all the way into the mid-2010s with their Mustang kits. But I hear that has more to do with the Big Three US automakers than with the model kit companies. Anywho, so I decided to for a change buy the metal front fork set from Tamiya to really bring this one to life as I regretted it so often the previous times before. It was an additional 19 bucks but you know what, it makes a difference. 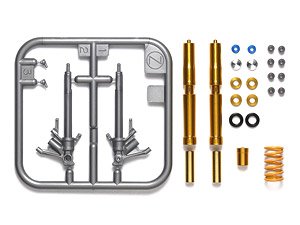 So lets start there first. The front fork set retails at roughly 20 dollar, closer to 18 if you get it from a Japanese retailer like I tend to do for Japanese model kits. Cheap shipping and a cheaper middle-man, still arrives within the same timespan as anything from the States, can’t complain. It has the two front forks and brake assemblies in plastic, aluminum forks, aluminum and rubber O-rings, gold, chrome and blue caps, proper coated yellow spring and a Öhlins reservoir for the rear spring. I really, really vouch for these little sets and I don’t think I’ll ever build another motorcycle kit without them for the simple reason that it’s so, so much sturdier. I could say, it’s because it looks infinitely better and you know, that’s still very true but while I’m a terrible painter with a hand so shaky I may as well be tasered as I brush, there’s far better and skilled people out there that can mimic that. One can argue, with photo-etch materials you can add a lot of detail to a model that would’ve looked bare without and I see the point that the front fork in the kit is totally fine, it’s adequate, with the right amount of airbrushing its impossible to tell the difference. But the metal fork? It feels better, it adds just enough weight to it that the front wheel is pressed down ever, ever so slightly.

Now again, ordinarily speaking this is where I would go on and on about the motorcycle’s history and how beautiful of a project it is given its past but I’ll be perfectly frank with you. As I’ve gone over in the other motorcycle articles, I know the square root of jack shit about motorcycles other than the two biggest properties of owning one. One, the stench of leather that goes with the saying ‘dress for the slide, not the ride’ and two, the millions of online videos that have motorcycle drivers replace any shred of a brain with pure grade testicular fortitude and do wheelies that they can never seem to control and then swiftly become meat crayons or well, quite dead. I only know of the Honda bikes in general due to the Super Cub, a moped/motorcycle(depending on what country you’re in, its CCs might be too great for a moped status) that has gained the legendary status of the “everyman” bike. The Ford Transit among two-wheelers in popularity, reliability and sheer recognizability. Other than that, on my daily commute to work I pass by a Honda-Yamaha dealer that proudly has a CBR standing out front on a raised plinth but it’s the CBR600 based on the all black color with the red decals. 21000EUR for one of the fastest bikes in the world, that would get you, what, roughly one and a half ’19 Toyota Aygo’s? While you can’t get groceries or keep dry in the rain, at least you seem to pay for exactly what you get.

Loud and proud describes the Fireblade SP perfectly as well. It’s the brightest red which is then off-set by beautiful Cartograf metallic blue and light blue decals with white stripes. Again, there’s no candle one can hold to the Italians with their decal printing, and holy crap I wish I could get close. The metallic flakes are very minimal but just enough to get it looking excellent whilst the white is a nice thick type that doesn’t let any red bleed through from underneath. Now I should point out, there’s methods to building this kit with the decals available. One is the box model, genuine Fireblade SP in red with blue and white accents and the other is the ‘optional’ black series type that is entirely black with slightly grayer Honda and CBR call-outs. It actually looks sleek as all hell and I ain’t gonna lie, kind of contemplating buying a whole second one of these kits just to get that version done too. Now it’s fair to say that these types of kits as of the last decade and a half have been nothing short of breathtaking and I could repeat all that I have said before but I suspect one might find this tiring.

So unfortunately, unlike the other articles and the ones to come, this will be a short one but let it be known that of all the motorcycles I’ve built by Tamiya and the ones I have yet to build(looking at you, you beautiful Ducati, you), this already is the best one available. If none of this managed to convince you to either give them a try, or at least try building this particular kit, I don’t know what possibly could at this point. They are pleasant, the kits build like a breeze but still have over a hundred and fifty parts and best of all, anyone can make it look like a professional build. It is just that well defined, that well designed and it comes with all the pieces and aides one might need to make it look any bit as good as the cover model. It’s fuckin’ 33$ without shipping, it’s like the best puzzle one can get! Hit up JazHobby on eBay or go to 1999.co.jp/eng/, do yourself the favor of having one of these majestic puzzles in your life.