Screw it, let’s rename the whole show to ‘decal updates’ instead of ‘blog updates’, sounds less dreary. So yes, last time I mentioned that I would attempt to keep track of what new sets I’ve wrapped up as of late and where my focuses lie for the foreseeable future. Big whopping “changes are ever present” and my menial mole rat brain will be distracted by the first shiny so my focuses tend to shift like the tides. That being said, first off a large thank you to those who rode out this particular storm with me and are still… with me. Secondly, and I’ll keep this very brief; the 3D printing aspect is coming along, learning or well rather re-learning 3D modeling is happening at a glacial pace but it’s… there.

My focus on that will still be small quality of life bits and bobs, nothing earth-shattering as I simply lack the time and resources for it. At best I one day envision myself doing clear head lights, small body related things like hood-tachs, door mirrors, spoilers and maybe one day try and replicate old engine blocks in 1/25th and 1/24th scale. The six cylinders from the 1970s especially.

Thirdly, I’m trying to break into the business of card-printed license plates and dash gauges, something I can actually do at home without any exterior printing process, 1500DPI strong on the higher quality grade photo stock that is commercially available(think those 30$ 10 page packs). The downside being that its… well, it’s fuckin’ photo paper. I now add them as an extra to any set people buy to make the steep buy-in price a little more bearable, and I want to catalog all the dash gauges and license plates I’ve made but it is a heck of a lot of work it turns out going through 250 odd sets one by one.

The new sets I’ve published recently are all as one expect from the 1970s and 1980s, though there’s no real structure to it. I’ve begun re-designing a lot of my old works to make them A) worth the money and B) higher resolution. One real big, bad example of this is the work I did on the 1975 Oldsmobile Cutlass 442 where I not only butchered the wheel arches, none of the damn stripes were even accurate.

This is a whole lot better, the stripes no longer have the inside pin stripe and the wheel arch decals aren’t thicker than the damn A-pillars anymore. I’m revisiting a lot of my old sets in this fashion, the 1984 Cutlass Hurst/Olds is up next as well as many of my old, first sets from 2016 are getting re-done. The ’84 Hurst/Olds is literally my first set, a botch job copy of the 1983 decal sheet in truth but it soon is now as proper at it should be.

Namely, the stripes are now… well, not haggard. The outlines are also now far clearer as well as accurate, silver at the bottom and black at the top. The top body stripes are three times thinner than they used to be, something Revell hadn’t gotten accurate either. But most importantly since the main thing had been fixed, I made all of the wood paneling in the interior. Every panel of burl wood has been accurately replicated with the switches and such on there, as well as duplicates without for those who desire the bare look. On top of that, I had already made the digital dash back then, but I also re-did the regular rally cluster which is a lot clearer and more detailed than the Revell sheet. Topped it off with some Eagle GT’s, South Dakota plates and that about covered it! I’m doing the ’83 Hurst/Olds as we speak as well as the ’85 FE3-X given the black on the decals never comes out well(looking at you Revell for the ’77 Firebird T/A), and the yellow stripe on the bumpers and body is far, far too thick on the Revell sheet.

Another re-do is the 1987 Chevrolet Camaro IROC-Z/28. The stripes are the same albeit it longer to truly wrap the bumpers(easier to hide) and furthermore it’s just far, far more expanded upon. Rally Sport emblems, regular Camaro emblems, all dashes from 1982 through 1992, you name it. The other Camaro sets from that generation still need the update but they’ll come with the 1985 Camaro Z/28 set all at once. This is just to show that old sets will one day see the revisit they deserve, so if you’re ever interested in a set and think it’s less detailed than the newer ones, shoot me a mail or drop a comment and I’ll revamp it ahead of the rest!

As for the other new sets, there’s a handful as of late, though a couple are just expansions on previously made sets, namely the ’76 Buick Century of which I finally gotten around to doing the Pikes Peak version and the consumer spec one(dubbed ‘Speedway Package’) that is just the other one, but with the extended fender decals.

Some more GM related business in the shape of the 1970 Camaro Z/28 for the AMT Ertl kit, the 1976 Camaro AHC-100 “Black Hawk” which was a special dealership stripe package that you could only get at dealers that had a partnership with American Hatch Corp(which went bust in like the 1980s) and would you believe that no-one ever really bought it? On the internet, maybe four pictures exist of it(one leading to a defunct Photoshop account, the other are dead Imageshack links, which really date the pictures nicely) and the only two remaining pieces of evidence is a magazine ad for the AHC-100 that got picked up again by Motor Trend and the AMT kit from 1977 that was sponsored by it, though the decal sheet is designed for the far better and more detailed MPC Camaro kits. And given I tend to do one-off special editions and niche as can be packages for decal sheets, I suppose even the shitty Trans Am copy deserved a proper sheet. Lastly is the 1981 El Camino SS for the Breaking Bad movie from October, which is Todd Alquist’s personal turbo-charged pick-up that got customized with a GT steering wheel, a massive turbo and blacked out Camaro wheels. It also had some odd SS stickers all over, which I tried to emulate(including the damage gained by Jesse’s escape pre-movie). 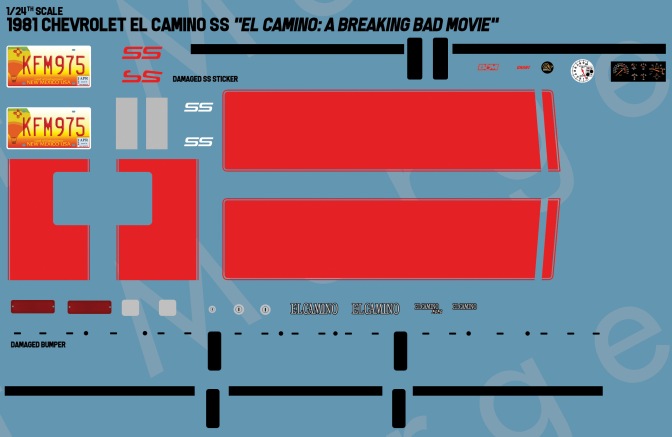 And even more besides that, like finally doing the mid-seventies Chevelle’s like the ’73 Chevelle SS and the Chevelle Baldwin Motion SS 454, the ’75 Chevelle Laguna S3 and finally traversing into the Nova/Ventura range of the mid-seventies including the very, very nice Hurst GTO. ‘Til then!