Hello again! The Year of slightly-longer-than-a-year-though Hasegawa continues strong! In this article, it’s the limited edition split-off of the ’71 Colt Galant kit by Hasegawa – the ’76 Galant GTO 2000GSR. Straight off the bat, I have to say that this is a specific sub-model release that not only is a two-in-one kit ala Revell, it’s also got a new part that is pretty much all over the box-art. Specifically, this kit contains the 1974-1975 fascia’d “early” version and the 1976 fascia version, though the “early” version got the tad bit of extra love with two sets of stripes. Something that is particularly interesting is that the early version only is available through this kit or the recently(as of December ’20) released chin-spoiler type that also, again, comes with both the early and late types.  If you wish to see the contents of this kit, there’s a parts layout section in the ’71 Colt Galant GTO-MR kit article that has just about all the parts included in this one clearly laid out, just not the ’74-’76 fascia, the louvred tail lights, the “sports visor”, C-pillar vents, and the decals. The rest is pretty much the exact same, so you’ll get a pretty solid idea of what is inside there. 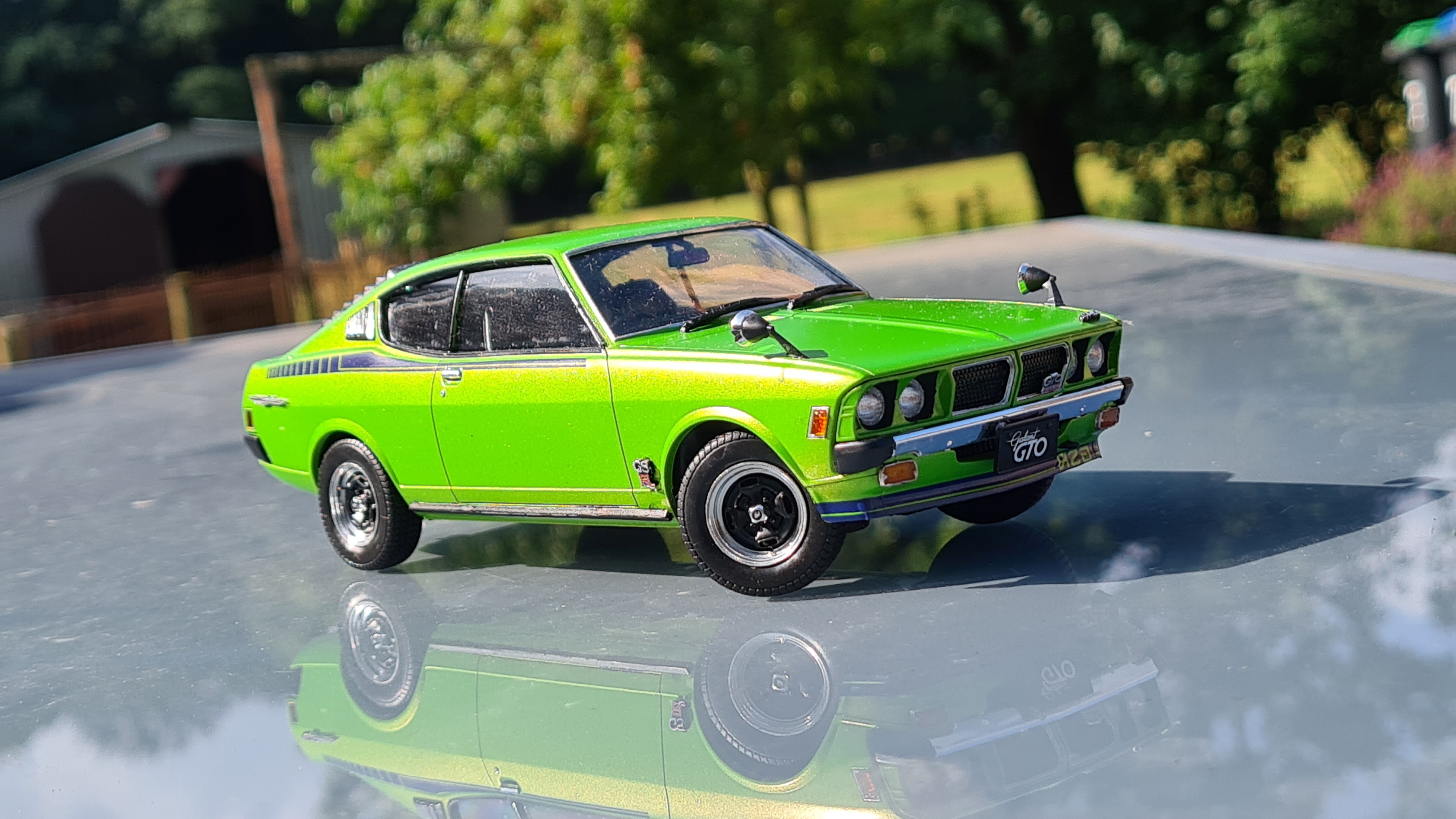 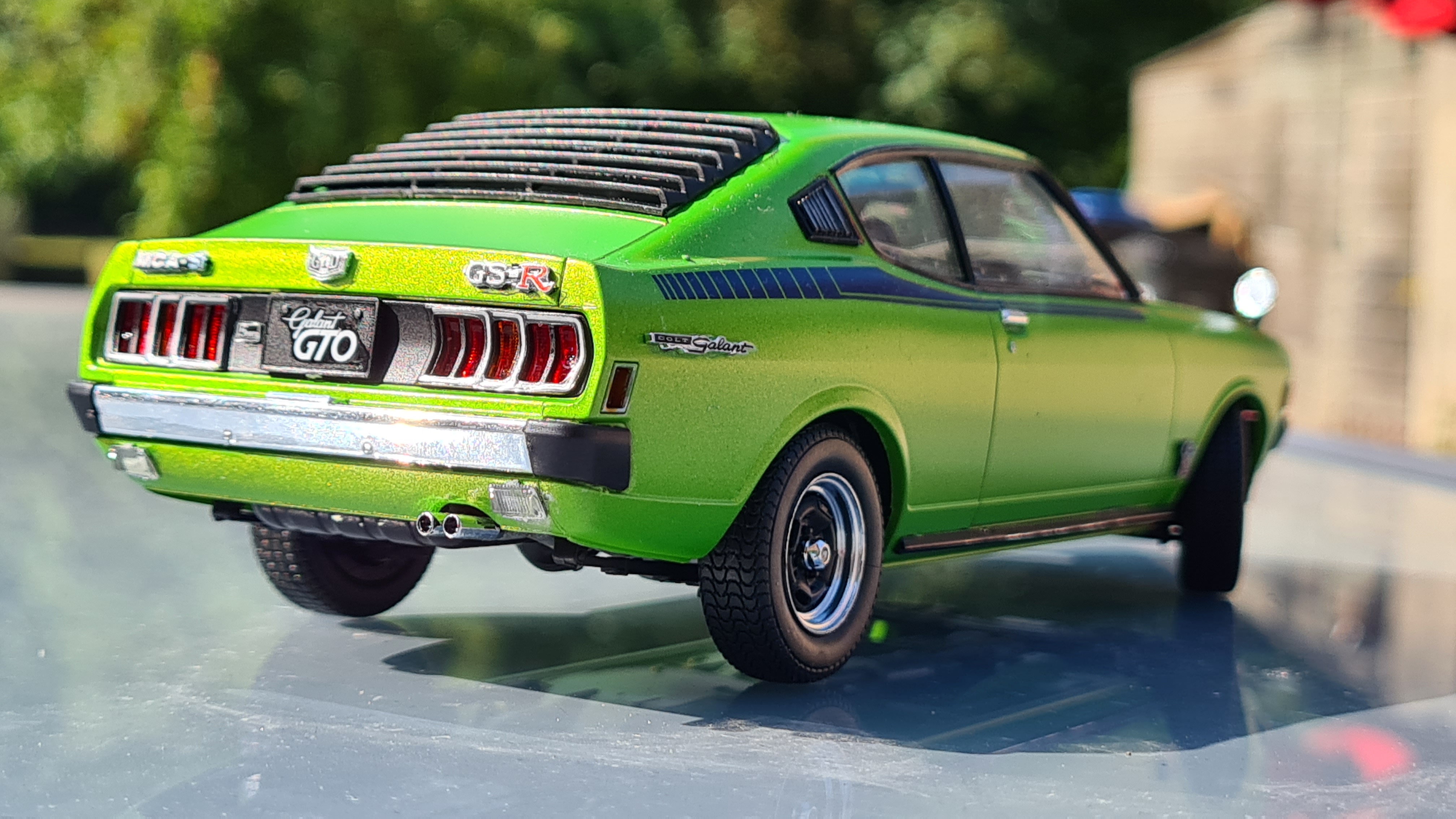 Now I specifically opted for this version, partially on account of the window louvres but mostly cause this is the only one of the ’76 2000GSR kits that packs non-white stripes. The issue then quickly became as I gave them a close look under bright light is that they’re actually navy blue and not black, which is something I didn’t actually notice until I was already three quarters of the way through making it. Does it matter? Well, kind of – I hadn’t anticipated using a green paint, rather I opted for bright red initially and I reckon having deep blue stripes would’ve definitely taken away from the finished model. However, on that poppin’ green which glows like an acidic hellfire in the sunlight? It only adds to it, the blue actually looks fantastic. Speaking of which, it’s a basic Tamiya spray, go figure. Didn’t clear it, as I didn’t, well, have any clear at the time of making it so, it looks a tiny bit flat but the color itself? It’s TS-52 “Candy Lime Green” over a light gray primer and ho-boy is it something beautiful. And given the 1976 version, or the “late version”, has black accents like the blackened corners on the bumpers, black C-pillar vents, black window trim, black louvres, it makes it looks all the much better. 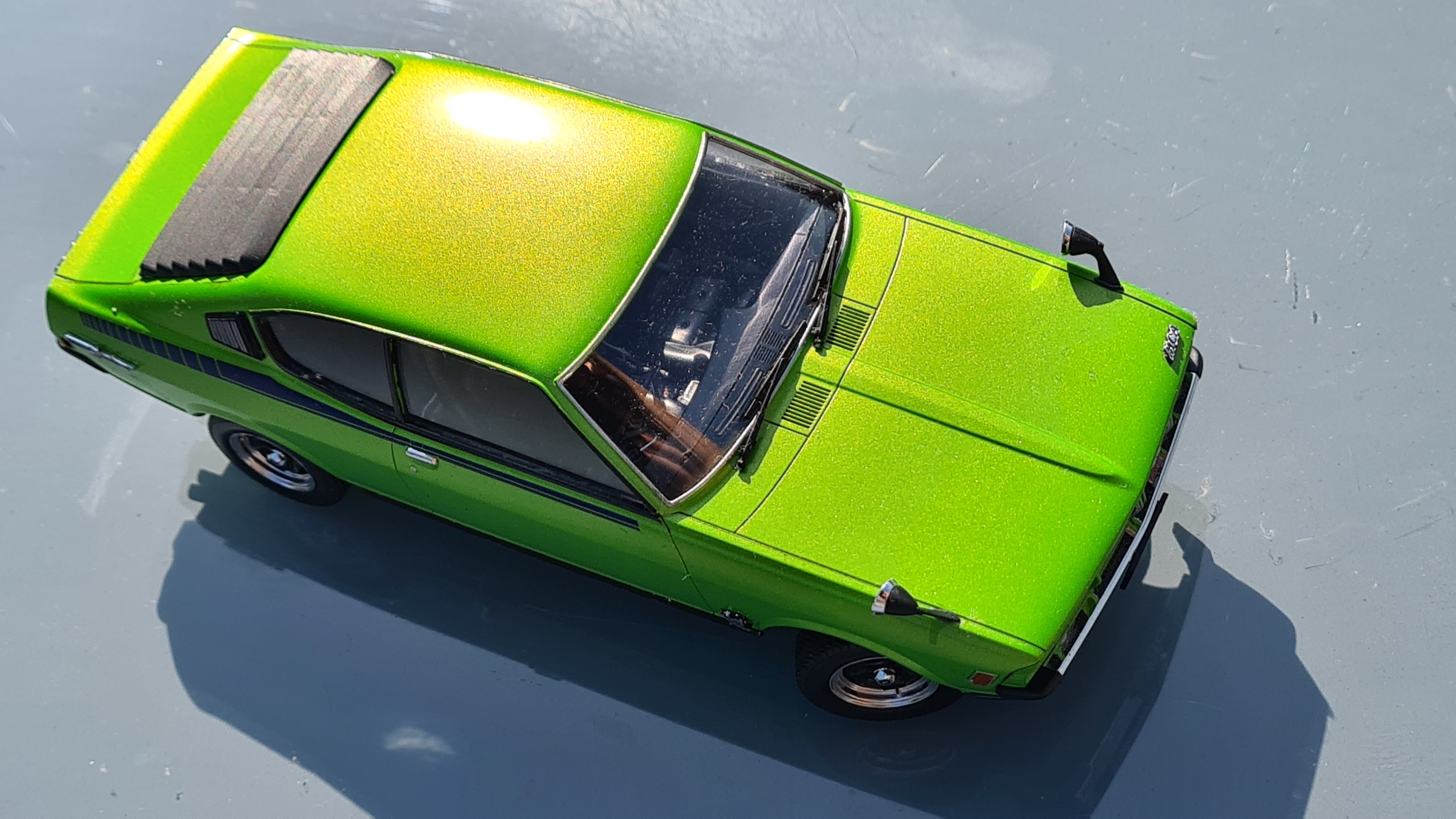 This is one of those precise machined kits from Hasegawa in their “Historic Cars” line that truly has barely if any, faults in the parts placement, like you got to have to give them credit. This is a case where I can safely say that this is the future of models, right here. Released in 2018, entirely made of 3D drawings and precise-craft parts that fit together like the world’s most satisfying puzzle, this kit is a really good example of how model kits no longer have to be frustrating as fuck to put together.  Again, I go into way, way more detail about this in the 1971 Colt Galant GTO-MR kit article as it has more sections dedicated to it but as far as perfect fitment goes; this kit sits very, very close to the top. Just as the ’71 Colt Galant, the main fitment issue is again the front fascia. It just barely doesn’t quite fit the model. It feels and looks roughly two-thirds of a millimeter too short on either end and leaves a tiny bit too much of a panel gap. Another thing that requires a little extra attention of the builder is the headlight assembly; it’s as close to perfect as it can be but the chroming process fills up the locator hole for the pin on the headlights, leaving it to sit a tiny bit too high and messing with the absolutely hair-tight headlamp placement. I’d suggest you either poke a hole with a pin vise, just deep enough to allow the headlight to sit flush again or scrape off the little pin on the transparent lens. Either way, that’s about it for the ‘issues’ on this particular kit. 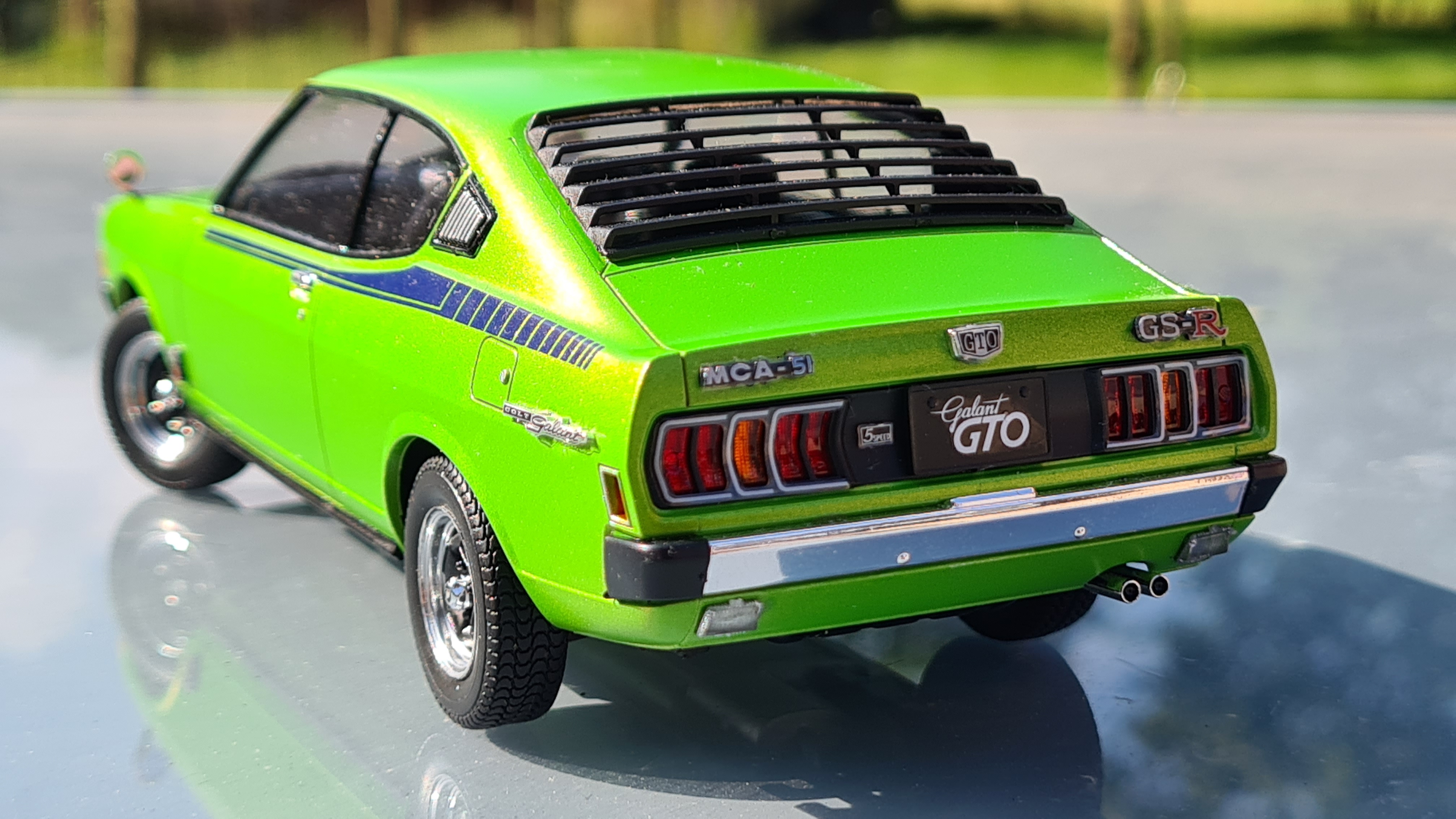 The rest of what you can call issues is just niggles on account of how much this kit spoils you. It’s just such a fantastic kit through and through that when something doesn’t wanna sit right or place well, it stands the fuck out. That’s a big, big compliment, trust me. Like, the trim on the rocker covers is chromed thoroughly and when you scrape it off the back so you can glue it to the body, it begins to warp under its own strain right away. So gluing it to the body becomes a bit of an adventure in running paint. Another thing, as I mentioned in the ’71 Colt Galant article, is the side-marker lights being too big for the holes. I lost both the rear lights when placing them as they pinged out like small bullets. I’d suggest you cut the side down by a fifth of a millimeter, like a teeny-tiny amount and it’ll sit flush as can be. Another, albeit specific to this kit issue is the air-dam decal. It should’ve had a slight bit of curvature but, well, it doesn’t. It’s a straight stripe for a curved air-dam, so it’ll either crinkle or not sit right. 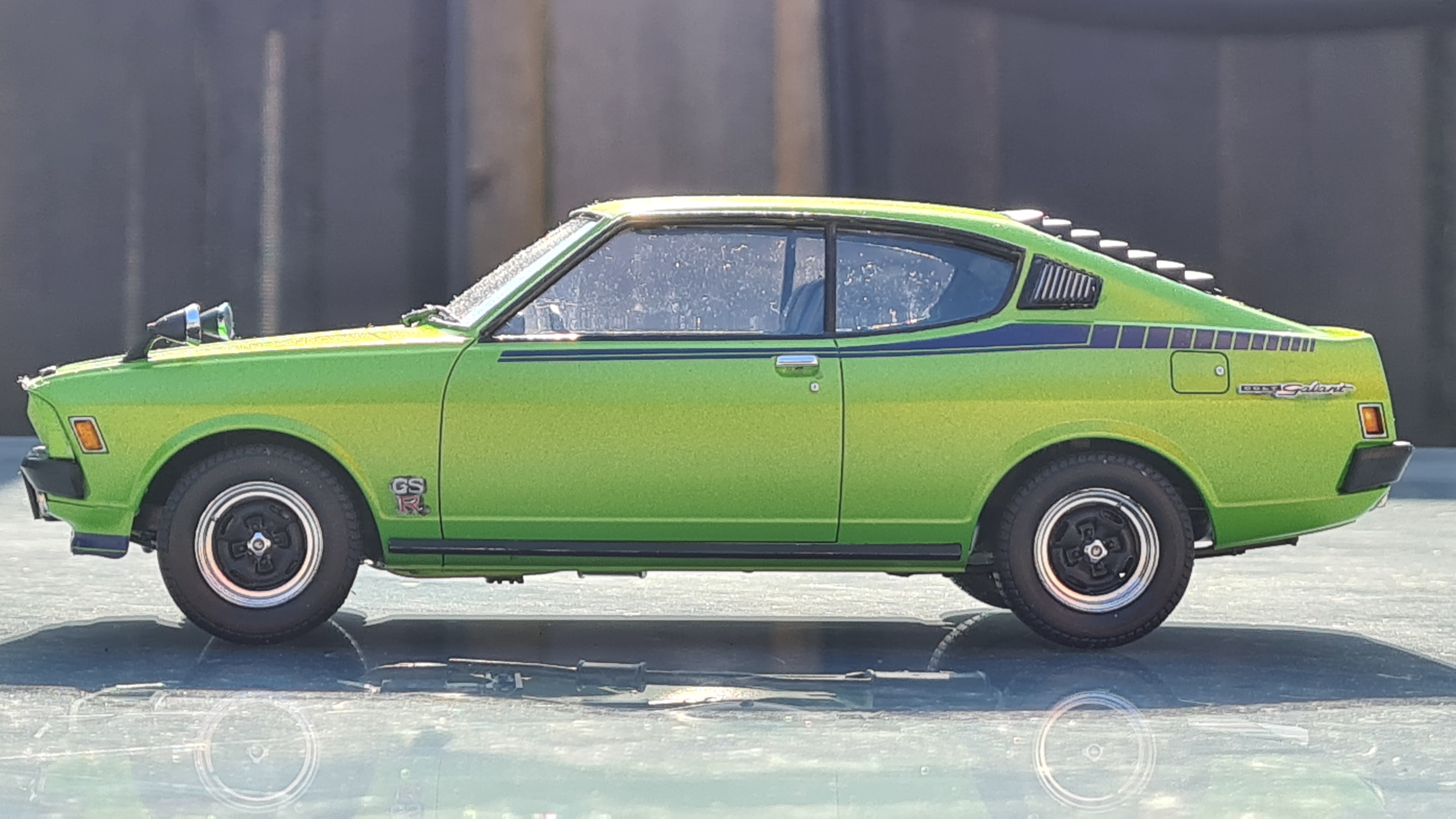 So I bet you’re wondering, where’s all the history of the car and such? Where’s your obtuse rambling about headlight restrictions of 1954-1976, or the constant pulling of correlations between the US, European and Asian automotive industries? Why is this article only six paragraphs long, at best? Are you a lazy bastard or what? Well, all of that… Not here, for once! Again, it’s mostly relegated to the main article of the 1971 Colt Galant GTO-MR. I figured, given I’ll be doing in most cases two of these models(there’ll be two Skyline R31’s, there’ll be two Sunny Pickups, two Colt  Galants, two 240Z’s, so forth) that it’s best to have one with the kit laid out properly, the history of the car and a very indepth review in itself, while these will act as a more bite-sized walkthrough the more glaring problems and the glaring positives. The least I can tell you is that the louvres look so Goddamn good that I wish it was in each release by default, but alas.