There’s a first time for everything, and with just how great Tamiya’s kits have been since the day they started making ’em. I kept being told that Aoshima’s responsible for the best modern supercar kits and thought I’d give ’em a try. To be fair though, while I’m semi hamstringing myself by not getting one of the Lamborghini or McLaren kits which are absolutely freakin’ fantastic, interior, engine and body, I’m not a giant fan of supercars so I went with a more middle-range vehicle…

… which is the Ralliart Lancer Evo X. Honestly the main reason I chose it from their giant range of models is that I’ve always had a soft spot for rally cars and their ever so increasingly powerful roadside variants(and the ’02 WRC brute is coming soon, the Evo VII) and the collection eBay goes for a fair price. Like, it ain’t easy to find a recent kit for under thirty dollar on there.

So the gist is similar to Tamiya and Fujimi: 1/24th scale, high quality with some of the best molds hands down as well as incredible details with some of the largest decal sheets I’ve ever seen. However, in many of these kits it’s just “curbside”, as in loads of detail found on the body, chassis and the interior, but no engine. Or rather, no engine bay detail. Hell it’s a joke among modelers that when you get an Aoshima kit with a engine in it, you can expect it to be a 20 dollar more expensive kit.

On top of that, more often than not these models have parts already painted or molded in a color that’s meant to correspond with the model, this one however is largely white besides the chassis, which is black, details and such also black, but also little extras like proper painted exhaust and indicator lights coming in the good shade of orange that you won’t be painting yourself.

I mean, when it comes to Japanese designed and produced they’re always… stupidly good. But I digress, you’re here for the Lancer Evo X, not my droning on about the basics of Japanese brand kits.

The model itself is basic, but the right kind of basic. The body and things that would be body colored are all molded in white, so that allows for customization if you desire. It’s also pretty simple to put together, and it all managed to work somehow. The kit uses a lot of bendy and snappy ways of getting say the bumpers to stay to the body(a tiny issue I ran into later when I dropped the God damn thing) but it just ends up making it all the more 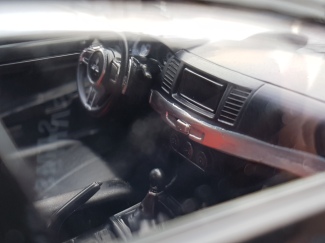 sleeker to the eye.

The detail on the body is giant, to put it mildly. From the tiny indicator lights on the side to the separate mesh for the grille. The interior is even more detailed, as said on the box, it has a whole separate get-up for lefthand drive. But it doesn’t end there, it has a manual gearbox or an automatic gearbox, it’s got the default seats for a ’07 Evo X, or the Recaro bucket seats for this version.

And as usual, the finishing touch is the decal sheet which is like always freakin’ massive. With the smallest, tiniest decals for say the little Ralliart logo on the rear-view mirror or the white stripes on the wheel inner caps. It’s staggering how deep it all goes.

In the end, I’m definitely gonna get my hands on more Aoshima kits, hell even Fujimi and Tamiya kits instead of solely going with Revell, Monogram and AMT Ertl. It’s nice to branch out to Japanese cars every once in a while, especially when the kit’s a nice simple build that gives me more detail than 50 hours of work would’ve.

I should point out now that, as you might’ve noticed on the pictures, there’s some damage to the kit. I dropped the God damn thing from my table cause it caught onto the edge of my coat, which in turn tore the bumper off from it’s little latch, the hood from its epoxy, the entire right headlight(and the decal for the indicator went missing somehow as a result) and caused the window glass to sink some. So trust me, it looked a helluva lot better before my dumbass ruined it. 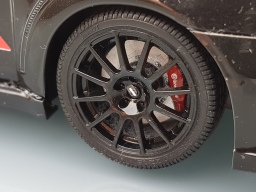 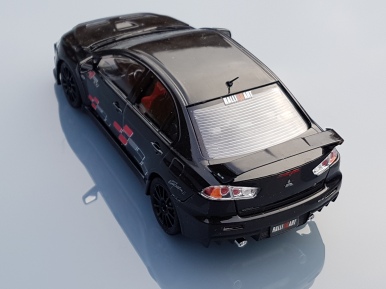