1971 was a good year for muscle cars all in all, we’ve gotten several overhaul of models that year like the ’71 Mustang becoming more square, the ’71 Charger becoming less square, the ’71 ‘Cuda becoming even more of a brutal beast to be reckoned with, the ’71 Javelin AMX took on its now iconic shape and it just goes on and on like this. Among the awesome new editions, facelifts and continuations of great cars came the shift of Super Bee exteriors, from being a Coronet to being a Charger all of the sudden. And again, just like most of Chrysler’s vehicles, the B-body vehicles got a friggin’ plethora of choices for the buyer.

The Super Bee was introduced as the sports version, one trim/price level under the Charger R/T but generally just as wonderful. You got literally choose from everything, 340ci V8 all the way through to 440 R/T, including the 426 HEMI(God, a 426 HEMI cost 800 bucks 1971 cash, which is roughly five grand in 2017 cash). Ramcharger hood? 383 side-intakes? Hidden headlights like the ’67-’70? Or fitted lamps? Body colored trim? Vinyl top? Bench seat? Generally, obviously nearly all the vehicles came with their pre-designated trim level installed, like the R/T got the highest tier stuff, side vents, 3-vent hood, so forth, but the late sixties were the era of dealer-orders.

You could have your car equipped with a mish-mash of trim level parts, if you had the cash for it and a dealer with connections. Sadly, the ’71 Charger was also the last of many things. The 440 Six Pack engine was discontinued for 1972, as were the hi-impact colors that now truly define muscle cars and worst of all; the Super Bee was killed off. Which is a friggin’ shame, given how good it looked.

I built the Charger R/T model last year already, the kit I had was the AMT “Pro Shop” version which had a totally pre-painted kit, start to finish. All you had to do was add small details like the indicator lights and the side markers and that was just about it and it was a fantastic little kit! I loved it, it was properly done before hand and sometimes it’s just nice to do something that takes little effort to keep your enthusiasm up high. But ever since then I actually really wanted to build the regular kit and I kept hearing about how good this particular era of AMT Ertl’s detail and casting was, so I bought this kit and a ’71 Plymouth Duster 340 which is coming soon, which apparently of equal super high quality.

But then I stumbled upon Keith Marks’ decal sheet for the ’71 Super Bee and on top of that, Kevin of Missing Link Resin Casters has a whole conversion set to turn it into a 440 equipped Super Bee, proper bumpers, hood and all. Which I will update on the model once they come in of course, just a matter of cracking the tail bumper off and installing the new one and hey-presto. And I finally got my reason for building it again, it’ll be just different enough to warrant a similar Charger R/T model. 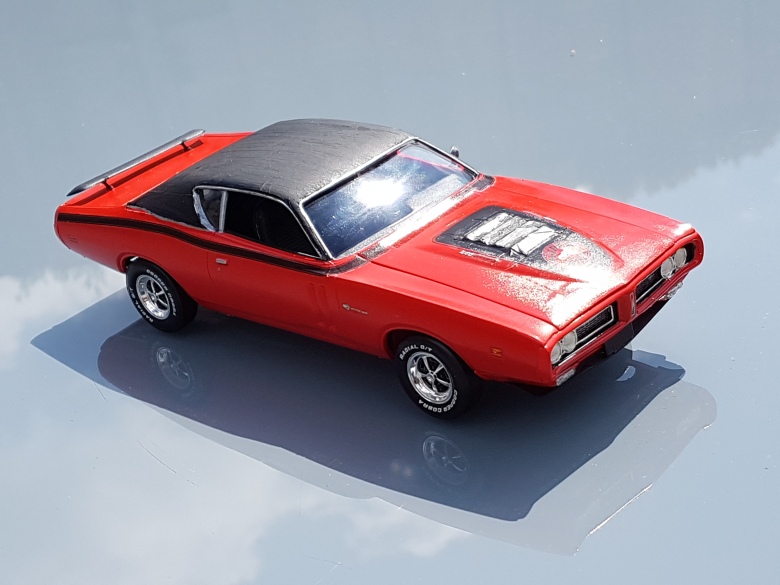 So my first thoughts were, alright let’s try and make it even more different while remaining within the realm of possibilities. First one was, hell yes, A-54 code colored and louvered tail-light bumpers. Two, red. Red as Goddamn sin. Three, vinyl top. I’m still not great at hand-crafting the suckers but I feel like I’m improving at least, the only hitch I had was that the satin black I use for it had gone old and glossy no matter the stirring so I had to quickly cover it up again with some matte. Four, some Magnum 500 wheels with Cooper Cobra tire letters. And the rest? Well the rest is actually AMT Ertl’s doing. Folks are right, it is just as detailed and fancy as the Pro Shop release and just as unbelievably nice to build.

The cast quality is so unbelievably high, down to the seams of the seats and the extremely clear Charger scripts on the body. The grille and tail valances have supreme detail and was all a breeze to let pop cause with the foundation being so friggin’ well detailed, just meant a single coat of paint and a bit of rubbing would replicate factory level detail. Goddamn, I hope they earned back every cent triple on this cast and mold, that’s how supremely high level it is and it deserves all the praise it can get. I kind of think I should’ve wired the engine up cause the detailed engine bay deserves it but… I dunno, I just don’t enjoy doing it too often and I shouldn’t force it on myself cause it’ll just have me half-assing it supremely.

The 440 Magnum under the hood is arguably better cast than Revell’s 440 block, which as y’all may know, I rank up there nearly highest on the list of Revell engine blocks. While Revell’s Dodge engine bays are excellent, the addition of the A/C and the smoothness of how the engine goes together, I’d argue it’s a grade above Revell’s. Hell, I can only give this kit two faults all in all; 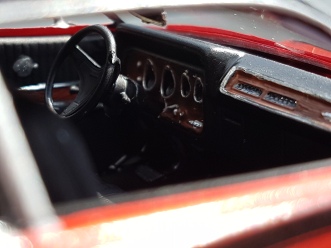 One’s just a personal wish that would kill off creativity but… screw it, gotta throw it out there. The interior shell is built attaching the doors and such to the chassis, which is fine and allows for us to add the detail to the door panel like the wood grain and chrome accents, but it’ll always snap off when you gotta force it into the body shell. I’m stuck on the thought between “should detail come before structural integrity” or “should structural integrity overcome detail”. Obviously, it’s detail overcomes structural strength, but it could’ve used some more strength, like a insert for the back pillar pads or something. The second is a bit of a pet peeve – the entire engine rests on a single square frame and the frame is only attached by a third of the whole thing so chances of it snapping off anywhere during the insertion of the chassis/interior or while you’re working on anything else is Goddamn massive. It looks better like this, yes. But functions a thousand times worse than were it so that the front frame was cast to the chassis already. There is a third fault but that’s no issue of the kit and more cause of the previous owner’s care of the kit – the chassis got warped significantly and thanks to that it flatout refuses to allow the rear valance to connect to the trunk which causes that giant wedge you see in the pictures. Though of course, once Missing Link sends the rear end; that’ll be fixed! 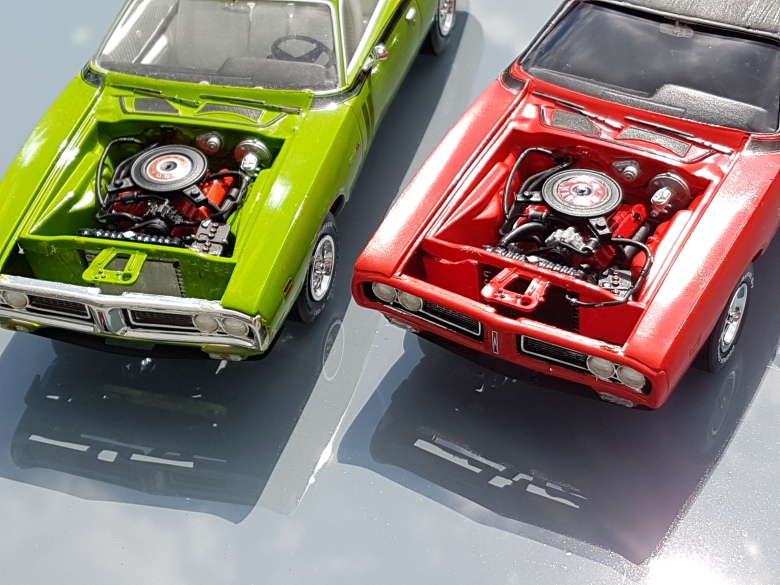 But still, y’know, annoyances. Mere annoyances. It’s still a unbelievable kit, even the instructions are some of the best I’ve ever seen with a complete list of interior and exterior colors, trim options, and such. I’m really looking forward to seeing what the ’71 Duster kit has to offer. And of course, one the Missing Link bits come in I am definitely updating this article with the new parts attached and a short bit about ’em. 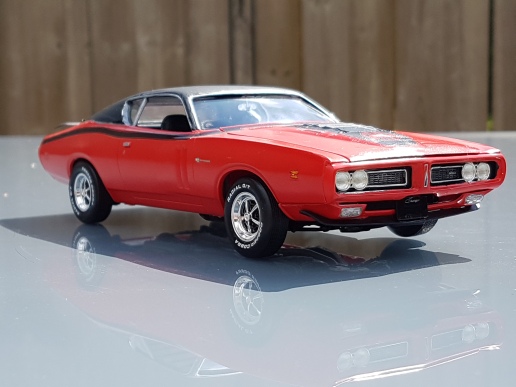 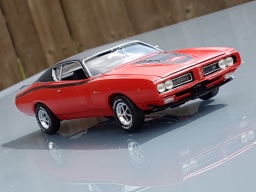 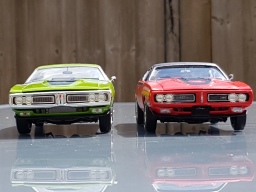 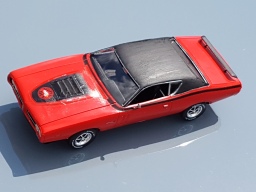 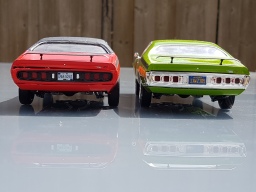 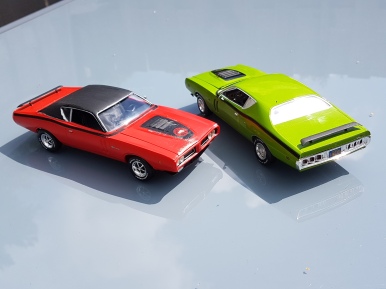 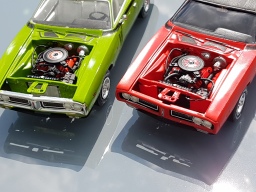 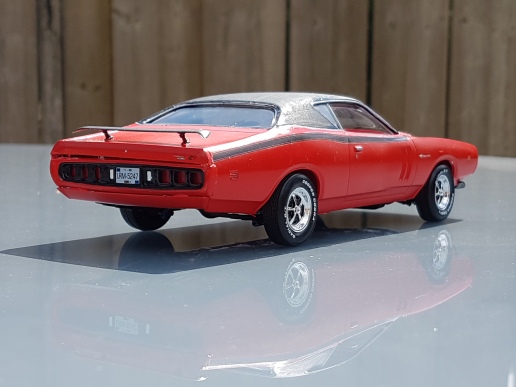 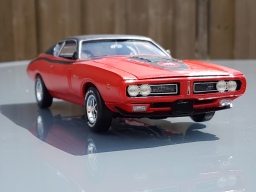