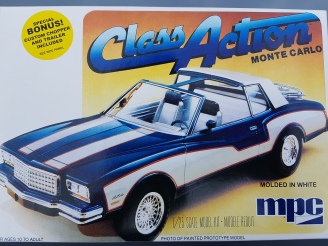 The very brief third generation of the Monte Carlo, or rather the ’78-’79 front end of most Chevrolet models, is one of my favorite cars of all time. Especially when they’re completely de-chromed. I used to play this game called “Midnight Club 3: DUB Edition” and one of the starter cars was a ’78 Monte Carlo and I just fell in love. In reality, it’s a subdued car with hardly anything left related to it’s incarnation in 1970 besides the idea of having a big engine doesn’t mean you can’t have big luxuries in the car. But despite it being a bit of a shadow of its former self, I loved it. The fact that Denzel Washington’s character in Training Day has a ’79 Monte Carlo only upped my adoration factor for the car.

The third generation kicked off right after the 1977 oil crisis, which more or less forced rationality in GM’s business plan that relying on outside oil sources and having cars do a solid 9MpG(3.8km/L) wasn’t quite… smart. So the ’78 Monte Carlo was shortened by fifteen inches, that’s a whole engine block shorter. It also got lighter by 800lbs(362kg), for reference; an adult brown bear weighs 350kg, they basically yanked a zoo out of the trunk worth of weight. But while the luxury boat of the early seventies died with the third generation, this did allow for something else to happen – the fourth generation of Monte Carlos, once more a contender at the NASCAR track and the badass beauties we know as the Monte Carlo SS. The luxurious sunday driver was still there as the Landau version, it just got shortened by a fair bit, and even then, for the days, it was basically a midget Cadillac with a more sporty look about it. 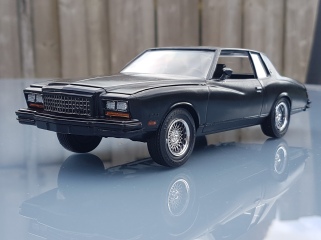 MPC made several versions of the Monte Carlo, starting with the 1978 release of the car which already came with something extra; a small trailer with a Harley Davidson(or at least, a copy of a H.D.). And it was… surprisingly subdued for the era. It had the typical MPC “custom” version where it has horrendously designed and in some senses, even stupid decals and over the top additions, however while it had the decals, the actual custom parts were wire wheels, luggage rack and landau roof. Go figure, it was sort of subdued! Then in 1979, the same kit was re-released as the “Wheeler Dealer”, just with a updated decal sheet. And I have to say, for a kit of the old days – it’s not awful! The chrome inserts for the bumpers are a brilliant idea to get the trim to really pop. 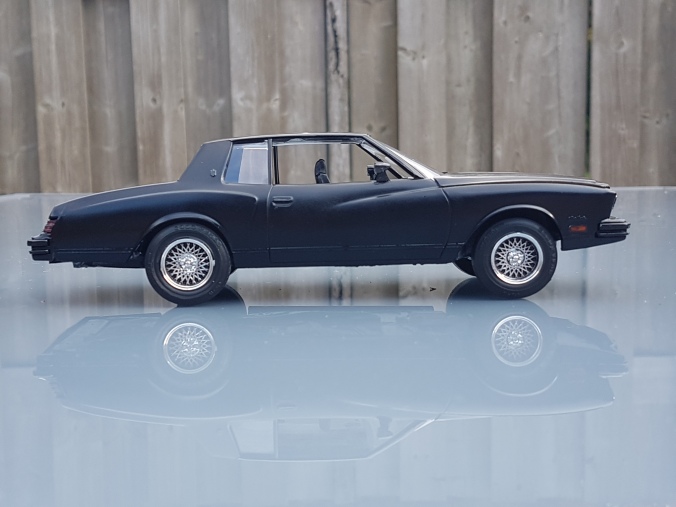 So in 1980 the Monte Carlo received a small face-lift, it got new double headlamps with the indicator underneath and the grille got a larger mesh instead, nothing big but it did require a small adjustment to the tooling of MPC. And boy, did they screw it up fairly badly. The headlamps were simply recast, however they didn’t remove the slant of the ’78/’79 lamps so they look… wrong, they just look wrong. The rest? 100% the same. To be fair, so was the real car but still, it’s a bit of a cheap upgrade. But y’know what, it’s fine, most of the seventies and eighties for MPC were putting out basic kits alongside dealership promo cars. 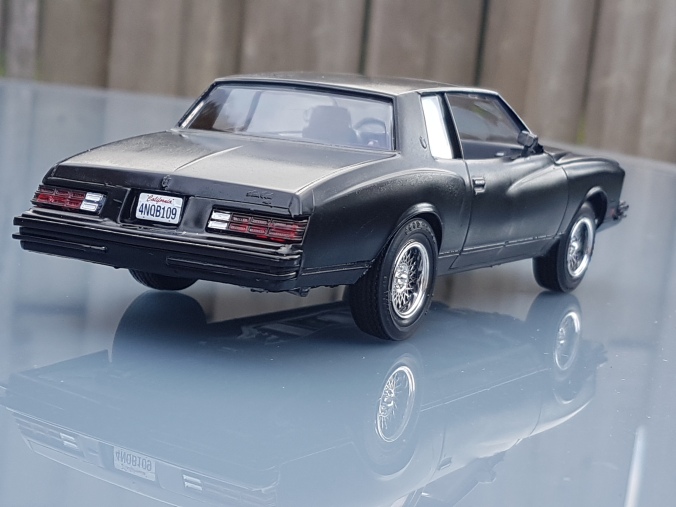 However, the kit I got here is a re-release from 2009. A very traditional Round 2 re-release, with nothing fixed and just a new decal sheet. Though, fair enough to them, they at least used some decent tires instead of the janky ill-fitting ones they force into every kit these days. The kit still has the generic, almost meh-quality 350 cubic inch V8 they put in nearly every single late seventies GM car kit for the sake of ease, the interior on the other hand isn’t awful but y’know, it’s like five pieces in total. The quality is nice and with some effort the interior can shine at least, which I suppose is almost required given that one big selling point of the kit is the optional ability of making it a T-top Monte Carlo without any hassle.

They give you this H-frame to re-stabilize the roof once you cut the panels out which is something I can really appreciate, I didn’t make mine a T-top but I should say that this kit is one of the few T-top Round 2 kits(MPC and AMT) where it isn’t a mess of no structural strength or a thing where you literally replace the roof panels with glass tops and have nothing there to hold them in place.

The rest? The rest is generic MPC schlock. Like I said, none of it is terrible but it is all just one giant afterthought. The whole chassis is one piece, no suspension, no exhaust pipes(besides the exhaust headers and catalytic converter), no axles, all one piece and just a matter of attaching the wheels. The sad thing is, MPC’s notorious for having used one or two chassis plates during the seventies and eighties and once again, this is that one. Problem is though, the damn thing doesn’t fit the car. The tail end of the chassis is half stuck to the body and doesn’t wanna sit in place. Speaking of which, another bad thing of the generic chassis is that the engine block awkwardly floats on the chassis, you’re just meant to glue it stuck to the frame on two points, but no guiding spots, no prongs, no slots, just two flat surfaces for the engine block and where it’s supposed to go on the chassis.

Door mirrors are the generic type they slap in there that literally do not fit the body style, nor do they actually manage to fit anywhere on the doors without looking awkward. I figured screw it, it looks half assed as it is, I’m just gonna put ’em on there and roll with it. I wanted to do the blacked out theme I got going on with several late seventies GM cars, like the ’77 Monte Carlo, ’79 El Camino and sooner or later the ’78 Monte Carlo by Trumpeter. So instead of chrome, I did the badges and such in gloss black and the rest in slightly dulled out black(learned a thing or two from the ’80 Ramcharger, which was too matte). It came out alright and I have to admit, while the headlamps are awful, the tail lights are great and the body is even better! It’s just a shame that MPC skirted by on such half-assery back then. But, well, y’know, who else would make ordinary cars? AMT maybe, in some cases Revell, but only MPC truly brought most of the normal cars to the model kit market. So… I suppose I’m still thankful that they exist.

It’s nice to have it added to the whole collection here, but still, like so many MPC kits – it just leaves me wishing that they tried harder and got a better kit out of it. 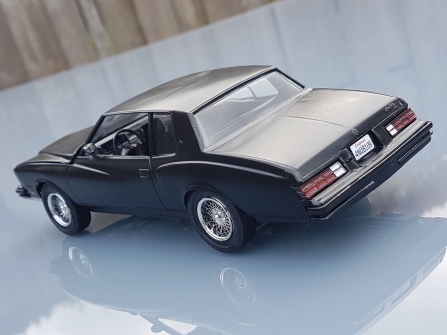 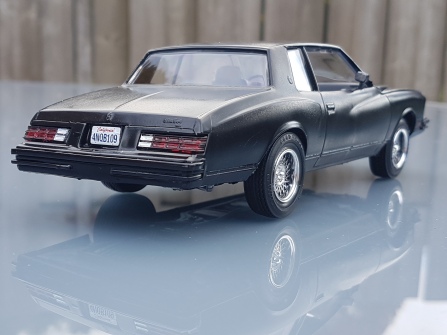 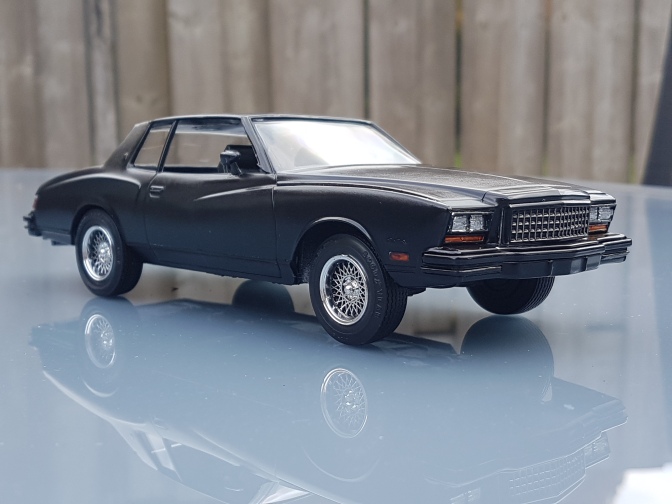