MPC and I have a rocky relationship, to start this whole thing off with. One of my first model kits ever was a MPC ’67 Pontiac GTO, which I build together with my dad nearly two decades ago. And we were content, we hadn’t build a beautiful model, hell the kit was pretty great but with the few cans of spray paints we had to our disposal and only having some glue to coincide with that, we only did okay.

Some time later, we bought the ’72 Pontiac GTO kit by MPC, which to put it mildly, it destroyed the desire to build models together. First we had to clear all the parts of excess plastic from the bad molding, then we struggled with painting it cause nothing would actually sit on the really, really glossy plastic without coming off. And after all was said and done, we couldn’t actually put it together cause it was just a misshapen pile of unhappiness, not a thing would fit. Bumpers were too large, wheels were too small, interior was too rough, engine wouldn’t sit, firewall never sat where it was meant to go, so on. 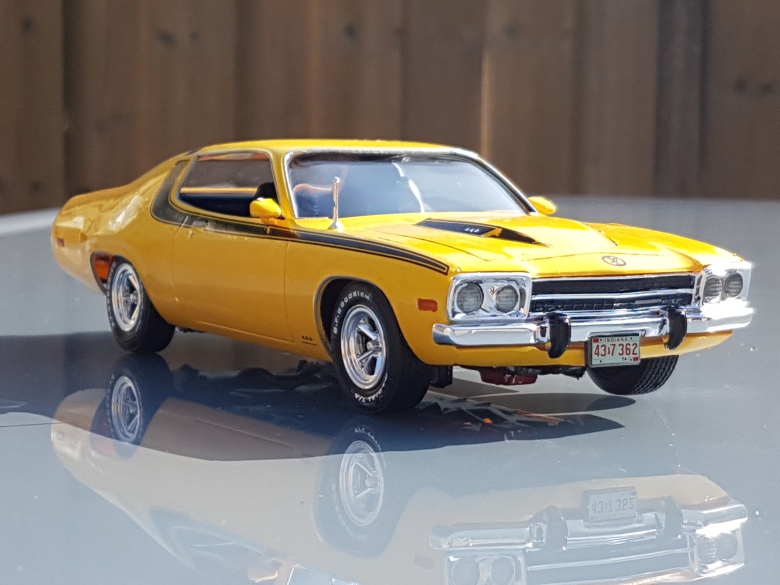 And that stuck with me, ever since I purchased MPC kits with caution. There are good ones out there, the ’67 GTO isn’t great, but it isn’t a pile of trash either. The ’80 Volare kit was awesome, even. But to show the other side of that same coin, the ’72 GTO kit is globally reviled by modelers alike, the ’79 Firebird T/A requires so much effort and fixing on the builders’ part that only the finest of modelers have build that thing to showroom model status. AMT Ertl makes fantastic kits and to know MPC is just another name under the same company, it just makes me sad to know that one can put out persistent good stuff and the other skirts by on mediocrity.

However, I figured I’d go into a MPC kit knowing full well I won’t have engine detail, I won’t have interior detail, I’m going in to make a nice model for the shelf. And in that respect, it panned out. Turns out that this kit, the ’74 Plymouth Road Runner is actually one of those MPC kits that is awesome. 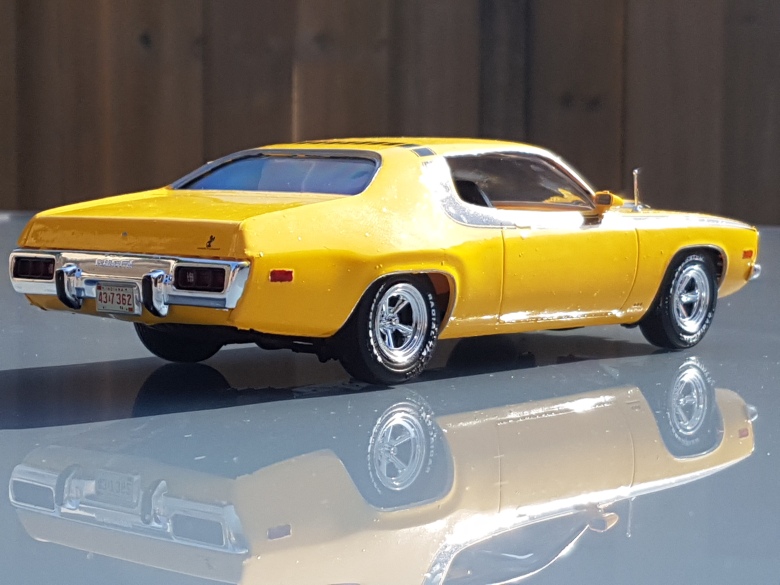 Anyway, onward with the model at hand, there have been several ’74 Plymouths by MPC, the Road Runner police package, the Daisy Duke Road Runner, the regular old’ Volare which the Road Runners are the performance version of, however this kit I have a feeling is a special edition… Why? Well, first of all it comes packaged in a gargantuan tin box completely covered in blue Road Runners, it comes with a little four inch statue of the cartoon Road Runner and it packs all of the features of the other versions, like the police lamps and extras, plus a whole new decal sheet with every color and engine option put on there.

Granted, the kit isn’t more than 50 pieces even with all the extra pieces that you won’t even be using so it’s kind of weird getting this massive foot wide box and only packing two little bags of parts. But hey, I adore the giant box, I’ve re-purposed it as a bread box for the kitchen, kinda tasteful!

Even the kit’s had a quality overhaul, the mold lines are only harsh on the tail end of the car and the only flash I found was on the seats, the rest was crisp. I molded the engine bay shut with epoxy, knowing ahead of time that the engine quality would be bare bones, and it was sadly the case as with most MPC kits and in some cases even AMT, there are however two options for engine; 360 cubic inch with a single air cleaner or a full blown 440 Magnum Six Pack, albeit without the appropriate decals.

I finally found a use for the wheels I got with the AMT ’69 Oldsmobile Cutlass kit around a year ago, which look much better than the stock Plymouth wheels and the deep-dish “custom” alternative. Looks much sportier now with the wheels and the Radial T/A decals, although I’m kinda disappointed with the lack of proper Mopar Mag 500 wheels!

Regardless, the only real downside to the kit is the interior detail being non-existent. So there’s not much to be said there other than it having decent mold detail on the dashboard

and seats, but the doors and such are just about flat with the smallest little lines somehow making out window cranks.

The kit also comes with a small tail spoiler and front air dam as little optional extras, sadly not the proper wing from a ’74 Road Runner but hey, it’s something.

Overall, I’m… really, really happy with this kit. Laden with bad memories of MPC kits, this is a very nice kit with a very, very nice box around it and a neat little Road Runner figure that became a gift for my old man. Again, forgive the story at the start there and only having a bit of meat at the end! 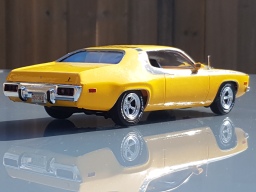 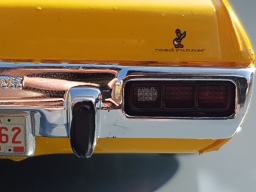