As I said before, there are far too few Oldsmobile kits on the market. The rights are predominantly owned by Jo-Han that haven’t put out Oldsmobile kits in many, many years, but man when you think of when they were cast and made, they made some terrific model kits back then.

The whole range of Olds’ from ’66 through ’72 were all fantastic, albeit not flawless. 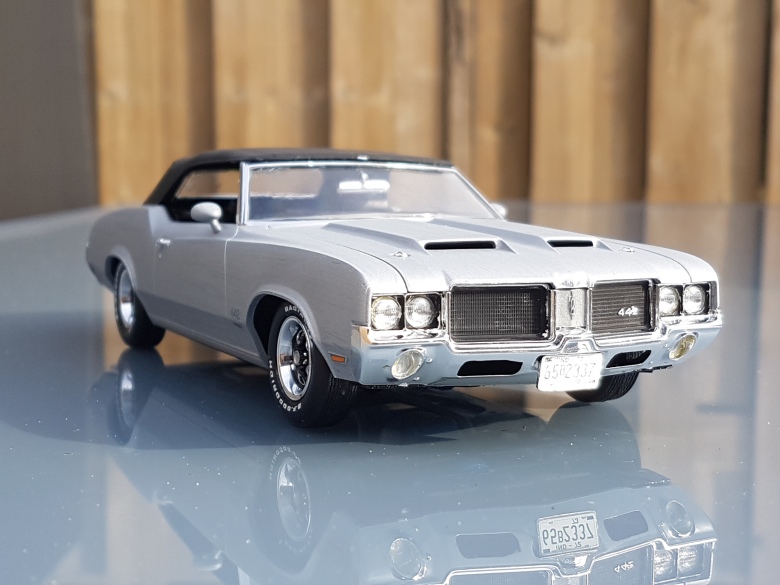 Now cut back to today, where Revell has a few Oldsmobiles on the market like the ’72 Olds Cutlass Supreme, ’72 Cutlass 442 W30 Hurst/Olds and the ’83 Cutlass Hurst/Olds and of course a Club Coupe from 1950 but I’m personally more into the last-of-the-V8s era myself. AMT has a bit of a diverse range too with a few ’66 and ’67 Cutlass models, of course a few mid-50s Coupes and their rather great ’69 Cutlass 442 and Cutlass

Hurst/Olds. They’re still few and far between and man, they’re a right pain to find for an affordable price.

But anyway, I got my hands on the ’72 Cutlass
Hurst/Olds Official Pace Car kit with the extra bonus of the Linda Vaughn figure, who most Indy fans and gear heads know as “Miss Hurst Golden Shifter” or just the queen of stock car racing. I mean, her relationship with Hurst, the Indy 500 and stock car racing in general is pretty legendary so it’s a cool addition but man, that figure is… uncanny valley. It’s painted rather well, but it really strikes me as one of those mid 80’s action figures with the very smoothed down faces and rather puffy everything, like almost human but not all the way. But hey, can’t complain about a freebie and some folks would really love it I reckon so, anyway! 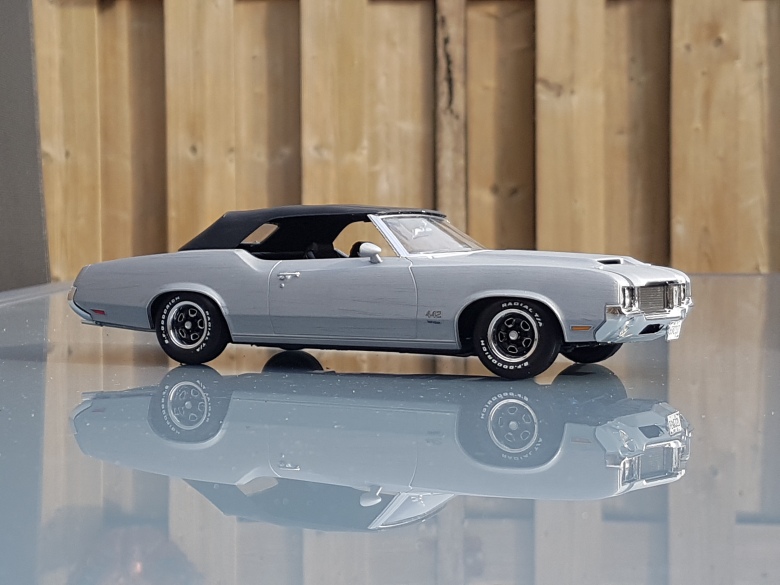 The kit itself is a more indepth take on Revell’s previous Oldsmobile Cutlass Supreme convertible kit, it still has the giant wheel-backs from the 21 inch wheels that kit came 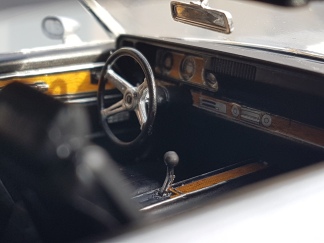 with, although this kit weirdly enough has all the pieces left-over from that kit besides the 21 inch wheels, which happen to be missing. Still has the rear spoiler, the choice of a manual Hurst gearbox or a 2 speed automatic with appropriate center consoles, different pedals with clutch and shifters to make the detail completely up to you.

There’s a ton of decals for this kit, a hell of a lot more than the Supreme kit for obvious reasons. The whole array of Hurst/Olds Pace Car decals are there, with every single one replicated perfectly. Along with those are all the appropriate 442 option decals, including the stripes that the ’72 was known for. Although, something I really wanted to have, were the black stripes rather than the white, it would’ve been amazing to have both. Really, really wanted to make it a silver Olds with the black stripes, but oh well! Furthermore there’s all the wooden print panels that are on the doors, dash and center console on the

decal sheets, that makes the interior look a lot better than anything I can do(which isn’t a lot more than just some brown paint).

Another nice choice maker is the option of grilles, there’s the standard large grid grille with the Oldsmobile logo on it that was on the ’72 Pace Car, or the small mesh 442 grille. Open functional hood scoops, or closed more tame hood? Top raised, top down? They’re all there, which adds so unbelievably much to variety.

The engine choice is something else that’s given a choice, the engine is either the W29

400ci V8 with the smaller air-filter, or the W30 455ci V8 which is the one the descriptions
and the actual H/O got in ’em. Detail to the engine bay is absolutely terrific, it’s nice and cluttered and modeled correctly. The only thing that isn’t quite right is the A/C unit that awkwardly links up on both ends, but what the hell, still looks good! Wired up the whole engine, battery, everything for a change cause the model deserved it.

One regret I got is not buying the photo-etch detail set from the Model Car Garage cause the decals look… flat, they look less like emblems and more like stickers. That, and I messed up the 442 logo on the grille with the acrylic pen. At some point in the future I’m buying this kit again, along with the ’69 Hurst/Olds kit from AMT and another ’83 Hurst/Olds kit from Revell to build the ’69 and ’83 in stock 442 and the ’72 in it’s Hurst/Olds Pace Car glory.

All in all, definitely one of Revell’s top of the line kits, without a doubt. 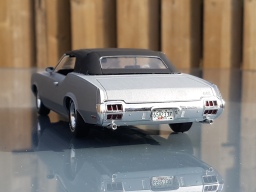 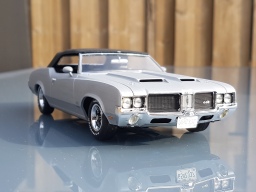 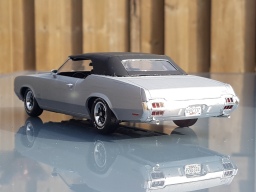 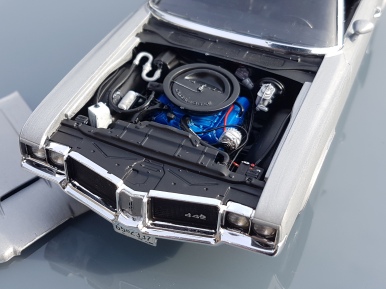 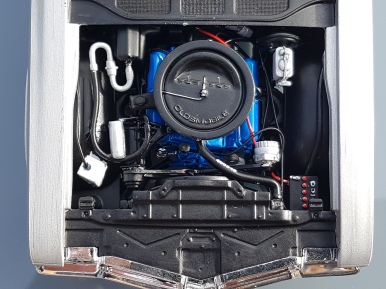 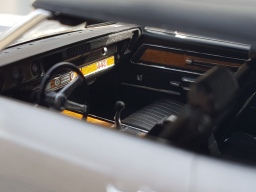