Revell’s been making quite the living off making model kits of “famous” movie cars. Most of the tuner cars from Fast and the Furious, like the Acura, the Mitsubishi, so forth, then of course also the ’69 Yenko Camaro and the ’70 Dodge Charger. The ’68 Mustang Fastback and the ’68 Dodge Charger from Bullitt, as well as the “retro-inspired” special version of the ’08 Mustang GT.

Traditionally they’re above average in difficulty and not just to cash in on the licensing, so the effort on ’em is always rewarded! And for the first time in a while, this one’s made with new tools. First Gran Torino on the market for as far as I’m aware

Though one thing needs to be said, unlike the others(or most others, rather), this one’s molded in color. The body parts molded in “tomato red” and the engine and chassis in black. In some

sense they made building it a bit easier cause you won’t need to paint a fair amount, though as always it’s molded in semi-gloss so the paint looks more dirty than anything and you’ll end up clear coating it anyway.

But despite that, it still looks good. Getting the right shade for the red paint would’ve been hard anyway so I’m really appreciative of the molding it in color. Though of course it eliminates freedom, but with the raised suspension and rather unique wheels it’s not really possible to make a regular ol’ Gran Torino Brougham or something in that vein.

I bought a photo etched detail set from Model Car Garage for the model, the molded grille is great in detail but the PE parts make it come to life so much more. And when I realized just how comical side-emblem decals look compared to PE parts if they’re available while building the Oldsmobile Cutlass 442, I’m just really happy I bought ’em to make it look that much better.

The gist of the model I suppose is that it’s nice and very, very approachable. Folks would consider this a “get back in” kit, something with a very decent result with fairly little effort. It’s a great model kit to get back into the hobby again, it hasn’t got a ton of parts, they’re all already pre-painted so all you really have to do is either build it and have a nice curbside model or paint some of the trays so you get a very decent middle-of-the-ground model kit that looks really good in the end.

Interior detail is pretty high, it has some very good molding so most the details are clearly

visible. Albeit all in one color, it does has some decals complimenting the interior detail, like the wood on the dash and glovebox as well as all the lock cylinders.

Engine detail is actually pretty high, I mean when you look at it from the trays or the box picture, it looks a bit meager, cause it gives off a “it’s all one big piece” vibe. But, it’s actually pretty damn good! I didn’t wire the engine up for once, felt like this was a nice build in between larger ones. The 351 Windsor engine’s replicated nicely with a fair amount of attention to detail. I mean, I would complain over it’s simplistic nature but I suppose that’s the exact appeal of the kit, so for what it is, it does look really good!

In the end, the kit’s really nice! Like I said, it’s great if you’re in a bit of a rut and feel like you wanna get back into the hobby but it’s just too much effort. Other than that, it still is nice to build at any given time, whether it’s in between builds or just cause it’s a nice car to have around in small scale. 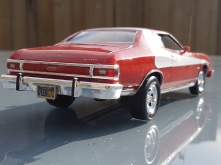 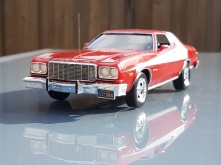 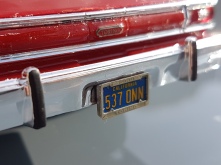 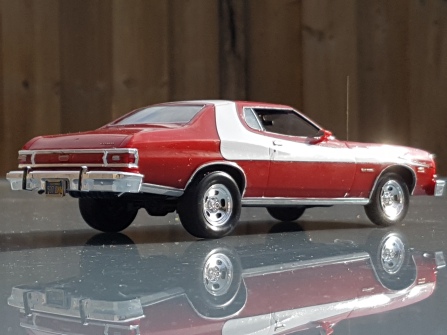 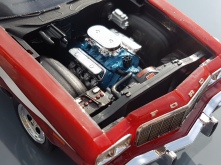