Soooo yeah, this is gonna be rough. This kit is a troubled one, to say the least but I’ll go into detail on how you really shouldn’t buy this one if you stumble upon it unless you already got a hold of either the Monogram ’79 Camaro 3-in-1 or the Revell re-release of the kit from 2011 or 2003.

Why? Well, first of all those make for fantastic models by themselves and they are already loaded with choice.

The only reason why I would advise buying these two as a pair is only if you want to build a 1980/1981 Camaro Z/28 instead of a 1979 one. Cause one of the upsides to the Fujimi kit is that the body is amazing and has the appropriate Z/28 logo on the grille and the raised hood instead of the ram-air, it also has much better head-lights and tail-lights. That’s always a benefit of Japanese kits, the bodies and body detail is always superb and with some work you can easily make the chassis and interior of the ’79 Z/28 kit fit this Fujimi body.

Besides, I’d argue you get better wheels with the Revell-Monogram kit. And you get the engine bay detail, but Japanese kits are normally always without a engine/engine bay detail so I won’t hold it against Fujimi for going fully curbside.

So, anyway! What’s so terrible about this kit that I’d advise against it? First off, this kit’s based on a mid-eighties release from Fujimi as a R/C car that you can build yourself. And for that purpose, it’s pretty nice! Like I said, the body is amazing and I suppose for a 1/24th scale R/C car it actually has a fair amount of detail to it. This release still has the battery housing, the raised interior so the model can hold the batteries and the kind of silly and half complicated front suspension set-up so the car can steer accordingly.

It’s been turned into a model kit such a ham-fisted manner that it’s nothing short of legendary. The interior tub doesn’t match the body, not even close. The area behind the seating is totally open and doesn’t even come close to matching the rear window so you can clearly look into the rear wheels, which are also just entirely open so from the side you can actually look through the bottom of the car. Also the interior has a little slot in there that is clearly visible from whatever angle you look at where the steering wheel has to kind of be slotted into half-sunk cause of course the interior tub has no depth to fit on top of the batteries.

The detail to the interior is really, really small and is mostly due to a shoddy mold job, which is odd given just how crisply molded the body and the clear pieces are. The chassis has little to no detail on it, I think so that the R/C model wouldn’t get hung up on everything and crash and the chassis is kind of awkwardly clipped onto the body that just screams “will come undone at the slightest touch”, but I digress.

And the fun doesn’t stop there, the rear wheel set-up is just a single metal axle that goes through a small hole, but the whole thing is offset so you get three little plastic bits to sort of fill up the space so that the wheels are actually sitting correctly. And even then, the metal axle is roughly twice the size of the hole in the wheels, so it doesn’t even fit to begin with.

So this kit sat around in my living room for close to a month and a half, nearly finished. I had spray painted the car into a smoked silver that I actually like a lot(it’s a factory Mercedes color, even), bought a Keith Marks decal set to make it more of a stock Z/28 instead of the “Underground Camaro” decal get-up of the kit(which is nice, I should say, it doesn’t look half bad in all silver with the Fujimi decals!) and did the body stuff like the tail-lights, details and trim. Then I came upon the chassis and gave up after screwing around with the wheels for close to three hours.

Here’s what I ended up doing to mend the situation, cause the original wheels didn’t fit and didn’t align properly and boy are the wheels you get with the kit strange looking. The tires, one of the really nice things about this kit, I put to new use with some of the spare rims I got from the two Monte Carlo kits I bought to make up for the missing pieces in the ’87 Aerocoupe kit. Apparently these wheels were available on the ’81 Camaro(N90 option) so hooray for authenticity!

Then I straight up epoxied the wheels to the frame using toothpicks, screws and a lot of patience and re-adjusting. They don’t look right, they don’t fit right but the damn wheels are on and that for this kit is an achievement in itself.

I should point out that even though I painted the t-tops gloss black, the kit advises you to cut them out and replace them with the clear ones that are delivered with the kit. And while this is a really nice extra and should definitely be done if you were to use this body on the Revell Monogram kit, as I said earlier the detail on the inside is so laughably low that cutting out the t-tops only enhances the attention on the just supremely awful interior.

Though yeah, I am being really harsh on the kit and Fujimi with this one. But I feel like it’s justified, this kit goes for 19 to 25 dollar new on average and that amount of money can get you literally just about any recent Revell and AMT kit brand new and even some of the Aoshima kits. This kit has two racks of extra parts it doesn’t use so it’s not only a shallow box, it’s also bloated with parts you can’t really ever use in a different build. It’s really a full retail price kit with half the content and four times the work at the cost of damn near all the fun. 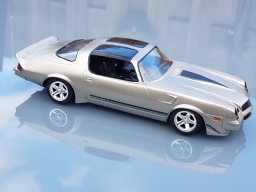 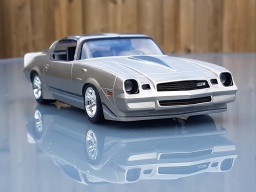