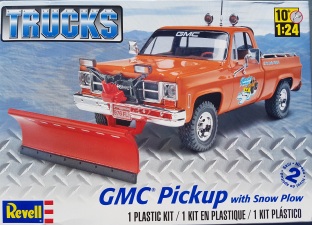 I do enjoy a good pick-up truck every once in a while, especially the little utility ones that are either pumped up with a giant V8(or in more recent years, a Vortec V6). This one’s a little different though, while still holding onto the big block V8, it’s a lifted 4×4! That’s a first for me, at least. The 1977 GMC Sierra(or C15, or C/K series, or whatever badge you wanna apply here) has been in the rotation from Revell and Monogram for well over three decades by this point. 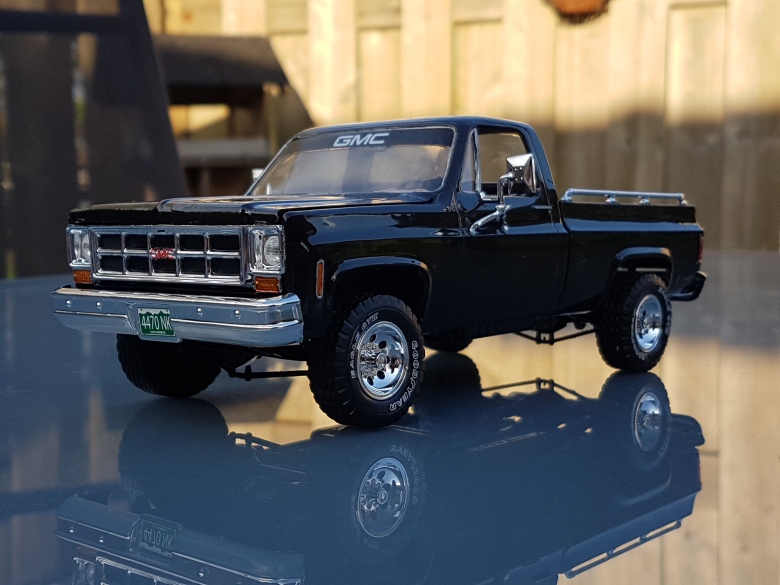 Having seen releases in a very wide variety in both shape and brand; the regular truck in 1980, the lifted 4×4 at in 1981(which this kit is based on), as a wrecker in 1992 and then suddenly in 2011 it came back to life as a snow plow kit along with a re-release of the wrecker truck. The same kit underneath as the “High Roller” ’81 release, just with a functional and supremely detailed snow plow. That being said though, this kit and its real life brother the Chevrolet C/K had various releases as well, also variations upon 4×4’s and even a step-side at one point in 1993.

But I digress, the snow plow kit has everything one need to make a basic GMC Sierra with a lift-kit, transferbox and all. And there’s always something so primal about a pick up truck build, every single one of them has the whole truck in pieces, the bed, the cab, a few metal beams for a frame, so forth. It properly feels like you’re building something from the ground up, all the way down to the beams of the frame. 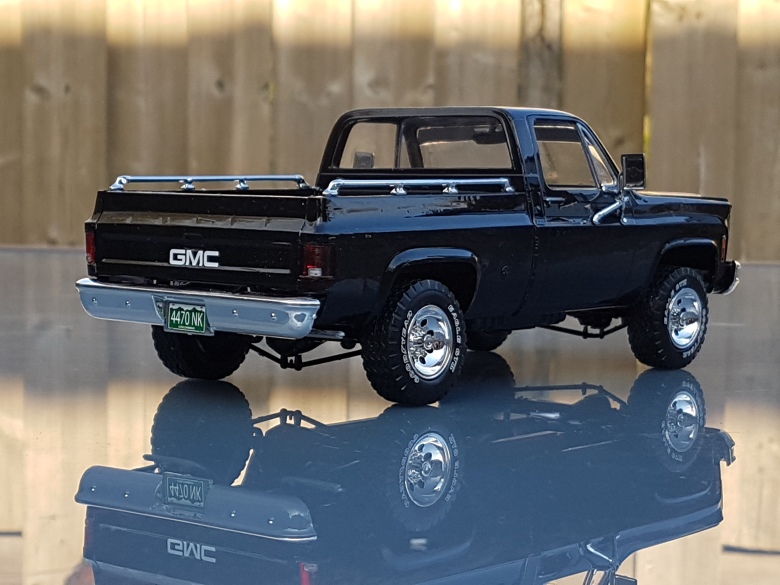 AMT did sort of spoil me, for a change! Usually it is the other way around, but thinking back to the Chevrolet S-10 SS kit and the Chevrolet C1500 454 SS, it was a lot more in depth with the detail and in the end looked a heckuvalot better all around, on this kit however, as this is a older Monogram kit – it has a pretty basic interior and engine bay, with little detail to spot. In fact, the interior is now so barren for once that it doesn’t even have a single detail on the doors whatsoever, just shapes for arm-rests but that is it. The engine too is a pretty damn basic piece, unlike most of their 1980s releases, this one’s just… simplistic. That being said though, it’s a semi-modified 350 cubic inch V8 and even though it’s a simple shape, it is a unique variation of it for the truck, something you don’t see every day. 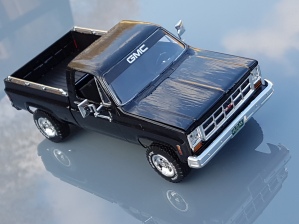 It’s a rarity to see a proper GMC truck as a model kit, after all they’re more often than not just Chevrolets in GMC clothing(such as this bad boy) though every so often there’s a kit of a GMC that really can turn some heads – take the ’91 Syclone for example. Heck, or the GMC Vandura 1500 from the A-Team, an AMT kit I’ve longed to have for two years now, damn you price gougers! And this one did share the stage with its brother for shaping the aggressive square style for pick-ups from the seventies onwards, and it is nice to see Revell Monogram putting out kits of ’em.

In the end, I did make a simple all black Sierra without the light bar, without the snow scoop or even the spare tire/jerrycan, though there’s a somewhat hidden third option in the box; you could make it a gardener’s truck or give it some sporty white stripes on the basic version. Though no dial decals, logos(other than for the spare tire and windshield), but y’know, most of the time Revell adds to the decal sheet for variety on old Monogram re-releases instead of making ’em better for detailing. 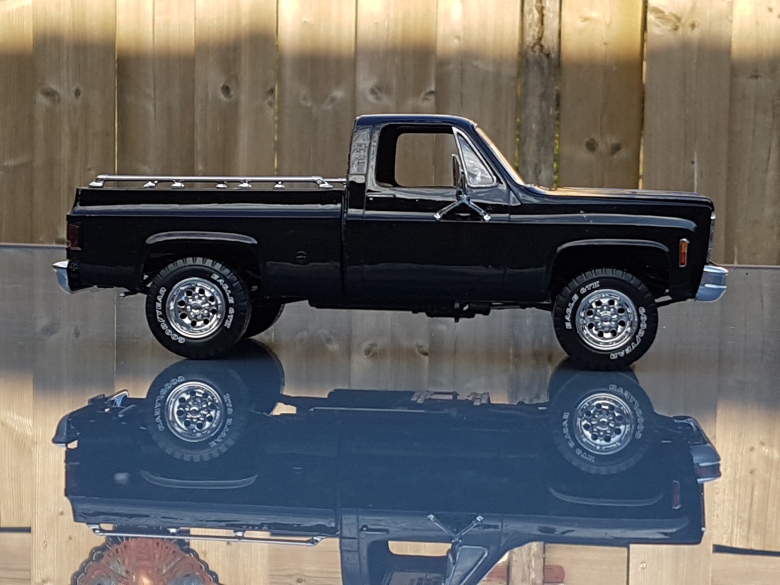 Though the re-release saw some nice improvements; the rubber of the wheels feels so damn good, it’s like those Aoshima wheel sets that just seem like the real thing just for tiny cars. I added some Goodyear Eagle GTII white letters on there, the outline version for a change cause it seemed to fit quite nicely without being over the top and sadly Joseph Osborne of Fireball Modelworks doesn’t do say… BF Goodrich All-Terrain T/A, not yet at least.

It does make for a mean, mean looking truck in the end. 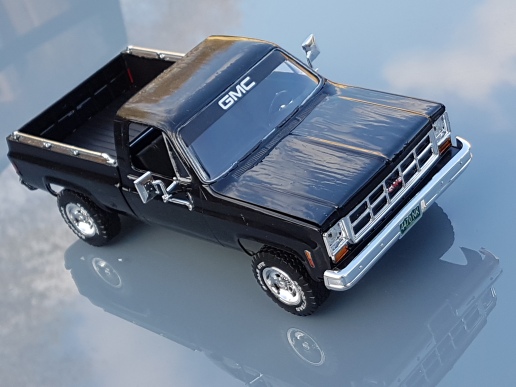 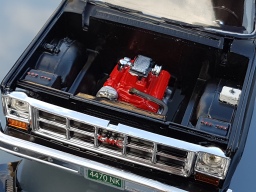 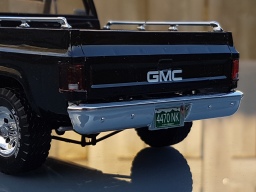 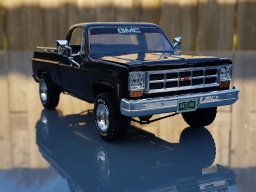 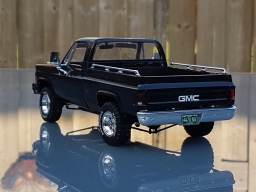 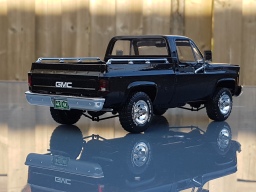 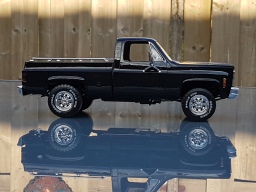 Nevermind my derpy snout in the reflection here, just pretend all you see is delicious wheel.