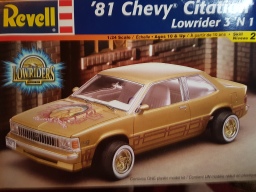 Revell, just like AMT Ertl and MPC, has a bit of a history of making some really interesting models that were relics of a era where the US vehicle industry was on the verge of bankruptcy and throwing out vehicles left, right and center to attempt to re-capture the US domestic market all the while laying off so many people that it broke records. Chrysler had the K body cars, GM had the “brilliant” all-new X-body Chevrolet Citation. 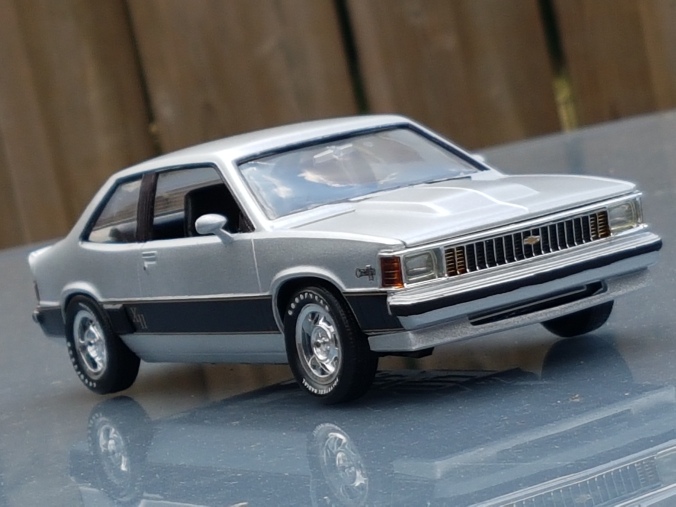 Sales wise the car was very successful, in 1980 over eight hundred thousand of the Citations were sold. And honestly, on paper, it looked like an alright little car! And y’know what, screw it, here’s the obligatory joke: this model kit lasts longer than your average Citation, plus it probably has better brakes than the actual car. The whole reason of the Citation’s failure lies with GM(and most other American car manufacturers at the time) being stuck between rushed innovation and desperately trying to cling onto a consumer market that decided that for the same money, American built cars just weren’t providing nearly as much working car as say, a Toyota or a Volkswagen. 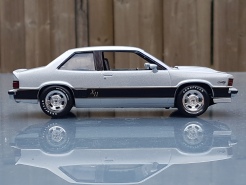 The downfall of the Citation was swift, within five years the car’s sales had dropped nearly 90% as recalls for faulty brakes, radiator hoses leaking that could lead to fires, rust issues, interior bits just popping off randomly and general lack of quality tore apart what actually was a functional little car that could’ve saved GM a giant amount of financial woes. The saying “too little, too late” stuck ’em hard though, as the Citation was the proverbial drop that filled the bucket past its rim: after the Chevrolet Vega was well underway of becoming GM’s last ‘blunder’, the Citation quickly proved that it could get worse. 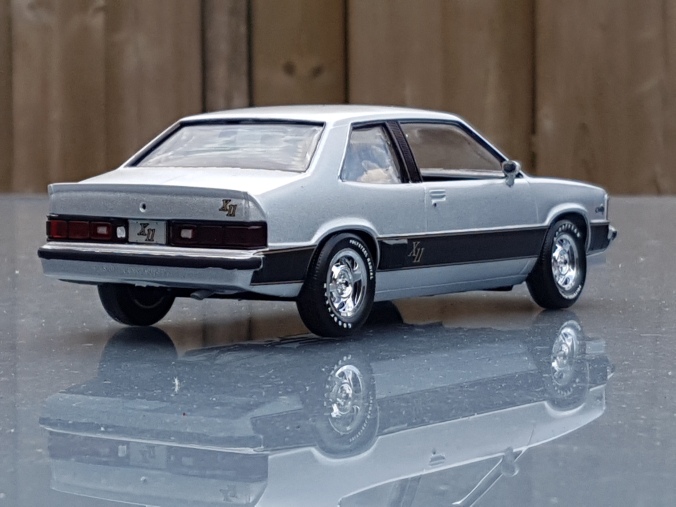 I’m really torn on the real subject matter, cause when you look at the car purely on paper, it was a frickin’ good plan. A east-west positioned engine, interior as roomy and comfortable as a full size Chevy Malibu of the same year, wasn’t actually hideously styled as some other similarly ill-fated cars of the eighties and above all: it fixed most of the issues that arose from the fuel crisis. So what the hell went wrong? Well, part is the rush for such a car to exist and part of it is GM’s mentality at the time being nothing short of legendarily stupid.

Firstly, what could’ve benefited the car the most was a brand new four cylinder engine. Instead, the base version got a clunky retro-fitted Iron Duke I4 that was outdated half a decade before the Citation was even a idea on a napkin. Second was the utter rush, which caused the car to get recalled three times in its short life span and had the car’s longevity rated at “just until the warranty expires“. The only sensible option GM put out was the optional transverse 2.8L 60 degree V6, which laid the ground work for two decades to come and even more. Sadly, again, too little, too late. GM tried to make amends by bringing out a updated Citation in ’84, the very cleverly named “Citation II”, which lasted a year and only sold slightly over five thousand times. 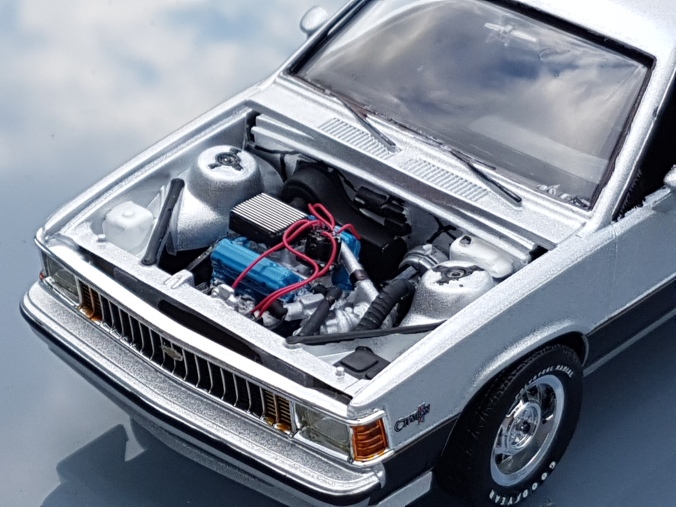 Anyway, enough history on the real thing, onto the kit. Back in ’81, Monogram released two Citation model kits. One sort of based on the 2.8L V6, just with a fake turbo and such, and the second being a custom “X” variant, which I can only describe as a European inspired “tuner” of that decade, y’know, the decade in which cars had difficulty even operating on their own accord. But I’ve been going on this trend lately of gathering the kits of the attempts of Motor City to try and get off the horrible rollercoaster that was becoming their financial sheets, with the ’81 Dodge Omni 024, the ’80 Plymouth Volare and of course, this little monster.

The kit I got here is the 2002 re-release of the kit as a lowrider, which honest to God – who the hell thought of this? Lets turn a failure from the early eighties with the looks of a shoe box with Malibu tail-lights that rusts within a matter of years to having it rain inside the car as well, into a lowrider! 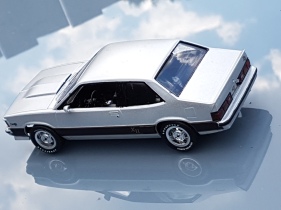 Though luckily, a theme of the lowrider kit series is that it’s always a 2-in-1 kit with plenty of options and thanks to that, this is the best version of this kit you can possibly get. It has the options for the X-11, the 2.8L V6 and the lowrider version, with Goodyear Polysteel Radial decals, two sets of X-11 decals and a whole stripe set for the custom 2.8L Turbo version. And to get it outta the way quickly; the lowrider version is hilariously ugly. The decals for it are low-res, the woman for the hood decal is vague at best(I think its a topless blonde? Honestly cannot tell) and it has the same ugly-as-sin outwards wheels that are on every lowrider kit from Revell during this time. (The ’92 Thunderbird, ’92 Mustang, ’84 Coupe Deville, so on, all have the same whitewall tires and wire rims and such, which are awesome quality and seriously well cast but just… ugly).

So while it has all the right decals to make this a X-11 from 1980 or a X-11 from ’82 onwards, which is actually really impressive given the source material. Though, oddly, the only year the X-11 wasn’t offered in the “club coupe” notchback is what the box claims it to be; 1981. Which y’know, is odd, but we’ll overlook this I suppose. The notchback is arguably the prettiest of the Citation family and somehow kind of held a bit of a legacy among folks while the hatchbacks rust away at derelict car graveyards, despite that at the time of the car actually hitting the market, the notchback just refused to sell at all and was dropped in ’84. 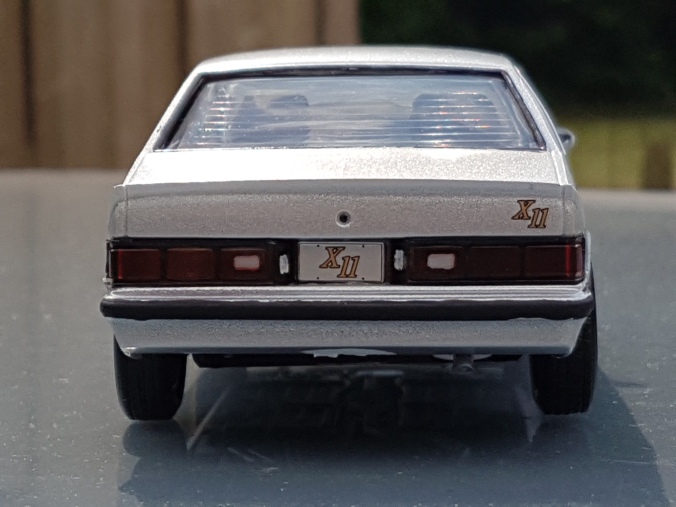 Someone at Revell really put this whole kit through the motions. As I said, it has all the decals to make it a replica of every year and the mold quality is freaking amazing. The only two places it is a letdown is around the exact places you’d expect ’em to be in a Monogram mold: the engine bay has the “bleeding” effect in which pieces such as the battery, engine struts and so on are molded inwards, which honestly is just lazy. On the other hand, the engine quality, the interior quality and the body quality, all are just… amazing. Hell it is insane how highly detailed the interior is for a 1980 mold, especially knowing the source material was a literal plastic slab with “trim”, which was just ripples and fake stitching. Yeah, the real Citation skimped on nearly everything, especially on interior quality.

I figured I’d give the little engine some extra love and wire it up, even though the weird aircleaner set-up that Monogram was so fond of in the 1980s does kind of ruin the aesthetic. Yeah, weirdly enough I’m in favor of the circular snorkel air cleaners! 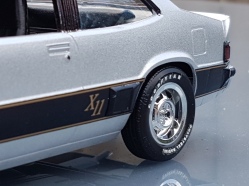 It all goes together really well, too. Which is hardly surprising from a Monogram kit, they always had the tendency to go together supremely well, the only downside was that they were also super basic thanks to said simplicity, though that really isn’t the case here. Hell, even the instructions are crystal clear with reference pictures to get some of the more complicated set-ups done right from several angles.

All in all, despite the insane choice for a lowrider, this kit is one of the best replica kits Revell’s done, it’s up there with the ’83 Hurst/Olds Cutlass and even to a degree, the ’69 Dodge Charger Daytona, in terms of it letting to recreate the original plus more. 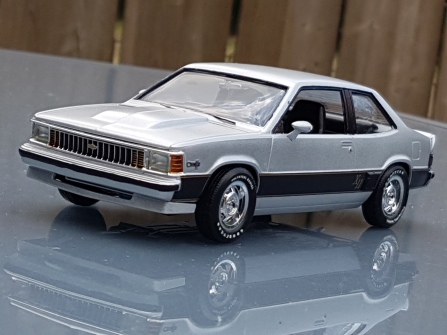 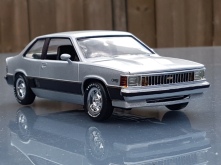 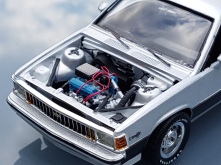 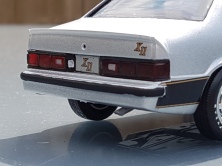 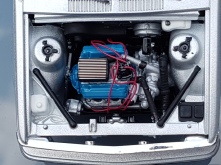 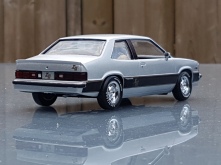 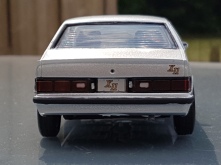 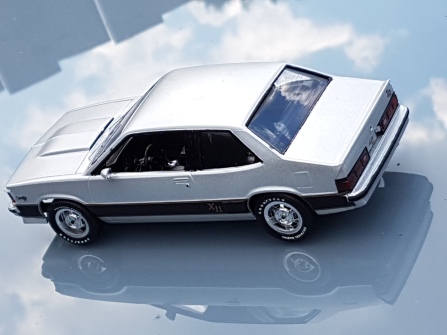 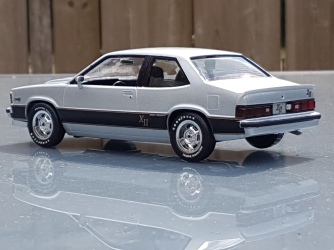 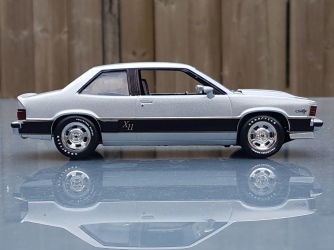 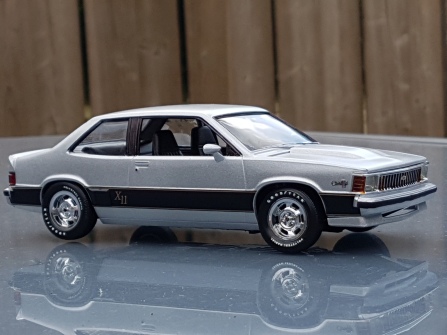 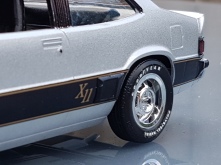 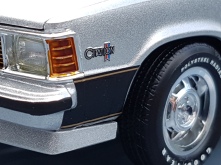 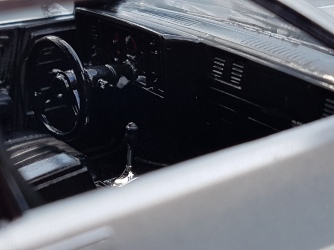 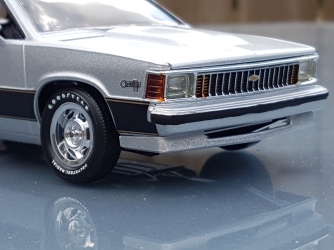