Chrysler Corp sure knew how to pick names for their cars over the years… Granted, many of ’em were catchy because Ford Motor Company came up with really “manly”, if not animalistic sounding names for their cars like Mustang, Thunderbird, Cougar, so on. Chrysler on the other hand? Charger, Challenger, Barracuda, Demon, Ram and such… And among them was the “Ramcharger”. The direct Dodge competitor to the Chevy Blazer and Ford Bronco, though those were around since ’66 and ’69 respectively(which were responses to the International Harvester Scout I).

Monogram first released a Ramcharger kit in 1981, a year after the SUV actually got a bit of a revamp by turning into a shorter, higher Dodge Ram pick-up, although now I type this, it always was exactly that . But it’s pretty much everything the first generation had to offer; quad headlights, rear bench seat, 400 cubic inch V8, so forth. Now in ’81 it was released as a “High Roller” kit, just like the GMC Sierra back then, a moderately detailed kit front to back that goes together rather well start to finish.

It has kept some legacy pieces from its two iterations since 1981, for instance the ’81 release had a giant light bar on the roof, while the lightbar’s gone, the headlamps for it still are on the glass sprue. In ’91 it was re-released as the “Gone Fishing” set with a giant motorboat on a trailer, though this version was actually the first Ramcharger that looked somewhat like a factory stock vehicle. The only changes besides that were more decals and a new set of wheels and tires to reflect it becoming somewhat more grounded in reality. And now cue 2016, suddenly Revell re-releases it under the “Trucks” line, kind of out of the blue.

Though holy hell do I appreciate it. The kit’s gotten some serious love from Revell, with the inclusion of two totally different yet still somewhat realistic versions. One’s the normal two tone Ramcharger, with the decals to properly do all the plastic trim on the side that separates the colors and the second is a very eighties three stripe set-up in the lovely shades of brown, red and orange(y’know, quintessential late seventies/early eighties colors!) on a white background. But they added some really nice extra’s too besides the trim, indicator lights, side-lights, emblems, so on.

I adore it when Revell re-releases kits and properly updates them through and through, with a fresher quality plastic that isn’t brittle, less flash on the sprues and a massively updated decal sheet. Round 2 models could learn something from ’em honestly.

From the get-go I wanted to make this an all satin black car, without any chrome left and to offset the black with giant white letter decals on the tires. I uh, I’m beginning to realize I seem to do this a lot with late seventies and early eighties cars, the ’78 El Camino and the upcoming ’78 Monte Carlo, but hey, it just makes it look mean in my opinion. Though, regardless, the intention was to make it look like a brutal all terrain machine that could take bumps, scrapes and even wrecks and just brush it off.

But like I said earlier, it is also a quintessential Monogram release. Pretty awesomely detailed on the body, great engine, pretty alright interior and meh engine bay. But there’s some things I kind of wished they had bothered with. Like for instance, clear tail lights would’ve made a huge difference and some more detail on the 400 cubic inch V8 engine would also have brought out the engine detail some more. I should actually take back the “meh engine bay” comment for this model as actually this one has some significant engine bay detail but less on the actual engine. I didn’t bother wiring up the engine cause I just found it a tad bit too simple looking to go through the effort on but meh, that could also just mean I’m a lazy ass. 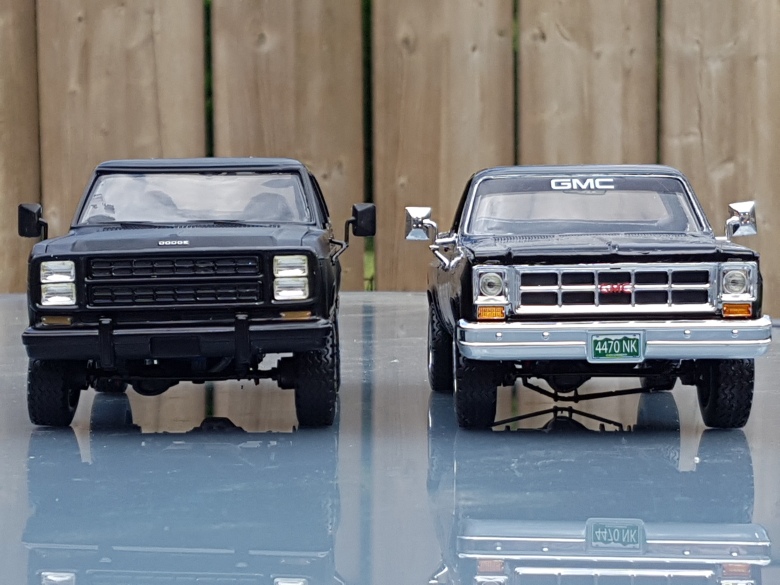 The kit has a lot of cross-love with the ’77 GMC kit, for instance the frame’s the same(even has the prongs for the GMC’s quad suspension set up), the transfer case and driveshafts are the same and the tires are too even though luckily the wheels are not. But generally the design’s the same; interior bucket sits on the frame as the top of the chassis, the body sits snugly on the interior bucket and they’re all kind of held together by the bumpers which are connected to the frame as well as the body. And just like the GMC, the car is massive. I mean, holy crap, it is a giant ride. Of course, part due it being 1/24th in scale and part due to the Ramcharger being massive(but short) in real life too, but I put it next to a similarly scaled El Camino for reference. It’s huge! 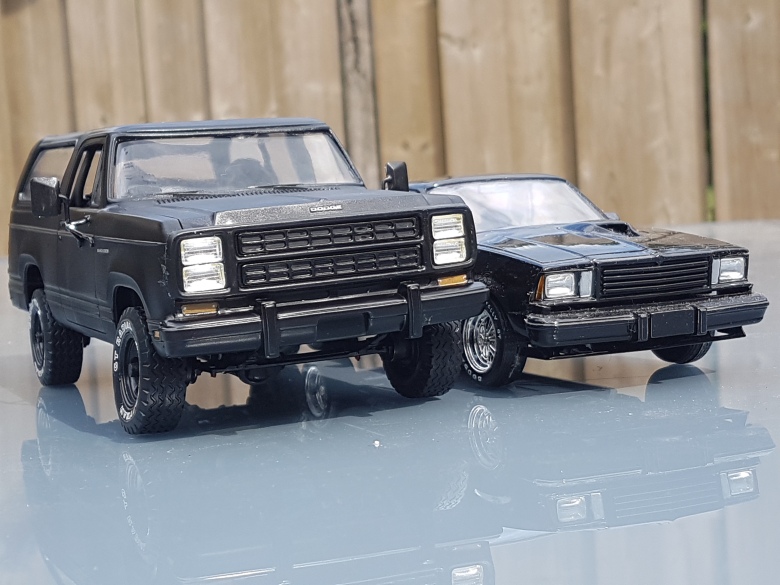 There’s hardly any bad things I can say about this kit. It’s simplistic, yeah, but that’s not really a bad thing. It is kind of clunky in terms of how the frame is attached to the interior tub, but it does work in the end. The front is so heavy that the wheels actually bend inwards some, but it doesn’t really detract anything from the finished model, so even that’s not worth complaining over. It might just be one of those kits that just… feels right, goes together right and looks right once finished, no matter what you do to it. 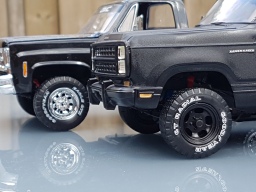 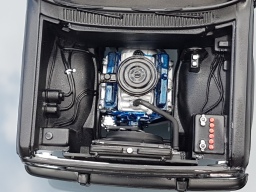