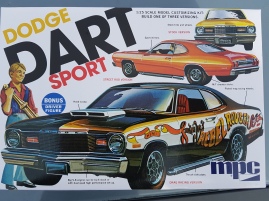 In 2013 MPC re-released the 1975 Dodge Dart Sport kit from, well you guessed it, 1975 and it was welcomed with great, great… nothing. Okay, to be fair to the guys at Round 2, there’s always demand so to speak and for one I am grateful that they dragged the tool from the dusty depths and gave her another whirl. And with respect to ’em, they had released another few of ’em disguised as an AMT kit in 2003 as a police car, which was a 1976 release called “Smokey, the Convoy Chaser”(if only they knew in ’76 what popularity that phrase was gonna get just a year later thanks to Jerry Reed, Burt Reynolds and Jackie Gleason). 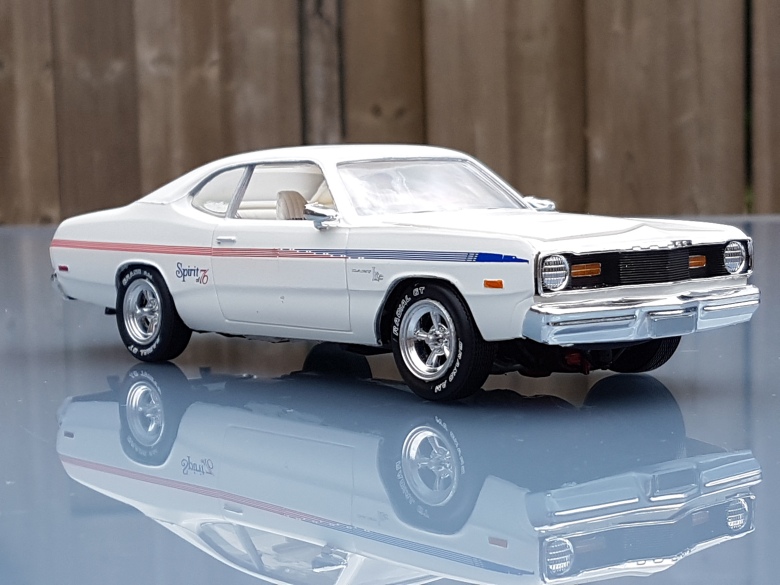 And it’s this weird picking and choosing from Round 2 that gets me, I’m really interested in the era that effectively killed the muscle car as a whole but at the same time, who’s in the offices going “Hey look, we got the tooling still, wanna give it a go again?” and then points at a ’75 Dodge Dart Sport, or a ’80 Volaré? The 1973 on wards Dodge Darts had the look of a teacher desperate to look hip. So in ’75 they wanted to cool the car up some with a special editon: the “Hang 10” Dart. Hang ten’s a surfer’s term for standing on the nose of the board with all ten of your toes over the edge, in the middle of a wave. It had enough space for a board and some ultra hip multi colored line interior with orange shag and of course the Hang 10 stripes.

I mean, I appreciate the effort but boy did that fall flat. The edition sold but it didn’t even come near being a surfer icon, let alone a icon itself. Hell, the “Swinger” edition which I hope with my dumb, half innocent European mind, was of no relation to the giant ‘swinging'(wife-swapping woop woop) wave that dragged through the USA in the seventies, but boy did this sex mobile have absolutely no features to go wild about. The only mid seventies Dart I personally dig is, is also the one that the Dart kind of farted into the annals of history with: the 1976 U.S. Bicentennial edition, the Spirit of ’76.

It had the prominence of being a Dart Lite and a special edition, two good things. One, it was a hell of a lot lighter to conserve fuel. Two, it only came with the Slant-6 engine. It was actually a pretty decent car for a Malaise era vehicle. It of course still had trouble surviving for years on end due to a lot of shoddy parts, rusting parts and electrical gremlins but at least the engine was a super reliable one. And amazingly enough(especially for the time), the car did 36mpg streches(15km per litre) on average. Plus less than thousand of those little guys were built and obviously a lot less exist today(with many in a state of disrepair), so it’s a double rarity!

So when I found out that Keith Marks has a set of both the Hang 10 and Spirit of ’76 decals, I bought the kit and began sifting through the thing. Firstly, it has the same pad printed Goodyear Polyglas GT tires that many if not all AMT/MPC kits now have. And again, just like usual, the fucking rim doesn’t match the tire. I love the enthusiasm for pad printed tires, especially from AMT who is the only one who has them printed on the rubber and not just included on a decal sheet but they are not a one-size fits all kind of tire. I’ve been going over this complaint on every single kit AMT has re-released since 2011 – the ’70 Chevelle, the ’80 Volaré, the ’68 El Camino and both ’69 Oldsmobiles I’ve built. They just don’t fit on legacy kits. So what did I do to mend this? Well the only rim I can fit to these new tires are the old version of the American Racing Torq Thrust wheels from MPC kits, especially the ones from the seventies. So I grabbed a set from a 46 year old Mercury Cyclone kit and substituted the Polyglas side with some Grand Am tire decals.

However, on the other hand, something new that is nice is the decal sheet. While I didn’t need it, it does have all the necessary decals to make it similar to the box and a Demon inspired Dart 340, something that I ain’t used to with MPC kits.

Now obviously there’s some differences between this kit, the year and the Spirit of ’76 that I wanted to create. For instance, the engine is definitely not a Slant-6 but a 318 or a 340 V8 that was turned into a V6 by simply reducing the engine length and giving it V6 exhaust manifolds, hell none of the Darts during this period had a damn V6 besides the inline six Slant-6 engine… well, MPC wasn’t known for accuracy at the time under the hood. But other than the different engine, the 1975 Dart had a chrome center panel on the rear end, but ’76 Darts just have it being part of the sheet metal. But I made due with it, I actually prefer the look of the chrome on the tail, it’s kind of a shame they ditched it!

But it does come with a whole separate engine, if you want to have one. A entire 426 HEMI engine’s included with sidepipes, though the mold quality on it is… well, it’s awful. The ignition wire points are smeared on, the chrome is kind of dingy though the transmission case is molded decently. Speaking of mold quality, the entire kit is a straight up re-cast of the 1975 kit – it has flash up the wazoo, it’s of the crappy “molten” quality on most of the sprues and the only piece in the entire kit that has seen a upgrade, which is oddly crisp compared to the rest, is the body itself. And thank God for that, cause it if it were on par with the rest, I’d wager it would’ve been as awful as the 1979 Pontiac Firebird casting from MPC, where you’d be working on the body and trimming extra plastic off for days. 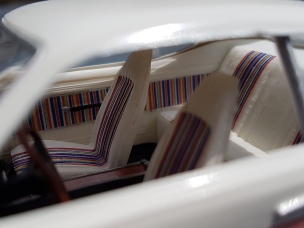 Hell, I won’t deny that with the sheer dinginess of the engine that I wanted to just epoxy the hood shut and hide the half-V8/V6 hybrid from hell but I figured, it would ruin the whole look and I did try to make the engine somewhat nice. The Volaré’s engine, while 100% the same, was cast a ton better with better plastic quality that actually had it fit somewhat okay. This? This is a frickin’ mess with parts cast too large due to old, old tooling. But I’m rambling on now, screw it. Either way, the not-Slant 6 is still there to behold no matter how badly I still wanna hide it all together.

Some of the other things that I wish were actually done somewhat better are just… well, regular MPC kit woes. Again, it’s not that difficult to cast clear headlights. The bumpers are horribly made on their backsides and they have no place to be attached, hell no matter the positioning.

It’s either look right from the front and awful from the sides, or awful from the front and right from the sides, there’s no winning with ’em. Other than that, the chassis doesn’t meet the body at any given place and has no single way other than epoxying gaps shut to actually stay connected to the rest of the car! There’s give or take a quarter inch of space on either side of the chassis and the body, and it apparently is just meant to connect to the interior bucket but, genius move here, it’s only connected to the tub at give or take a fifth of it.

So whats the bottom line? Well, I would say Round 2 needs to get their crap together cause part of me feels gypped at the idea of a simple second spin of the Dodge Dart Sport molds that had gone unchanged since 1975, with not a single bit of improvement being made other than the by now utterly expected new tires. But, they did improve on the casting quality when they put out the ’80 Volaré kit, with unique Radial G/T tires, much better quality plastic and a lot less, if any flash on the sprues.

Thank God for Keith Marks’ decal sheets and Torq Thrust wheels to make this thing look much better, especially on the interior front. And all in all, from the outside, it ain’t looking too bad! Well, if you discount señor butterfingers, the royal me, ruining the decals while wrestling the body onto the chassis… 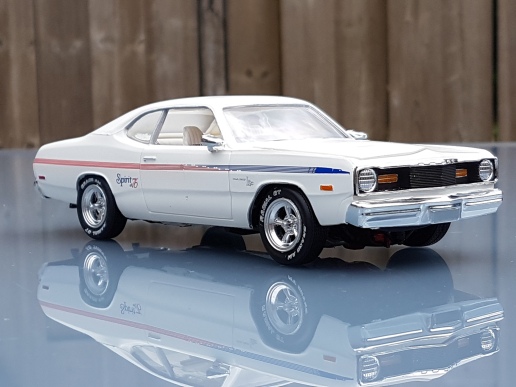 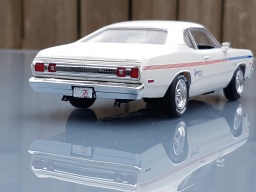 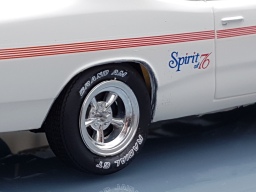 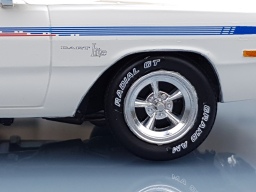 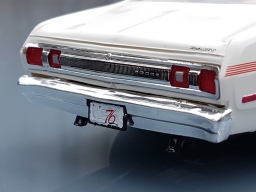 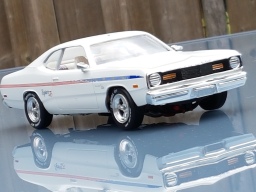