Buick always has stood far ahead in being a pioneer in performance, from the thirties on as the first to break 100MPH with a factory stock vehicle(the ’36 Century) and closing the muscle car chapter with a big, gargantuan bang in 1987 with the modified Buick Regal, the GNX. In between? Well, they’re responsible among many other things, for the 455 Buick V8 engine. A engine so powerful and controversial, in November 1984, the Skylark GS Stage 1 was deemed the third fastest muscle car by Muscle Car Review, second was the 1966 427 Corvette and first was the 1966 427 Shelby Cobra. This obviously had a giant shitstorm associated with it; faster than a 426 HEMI powered Plymouth GTX? Oh boy. 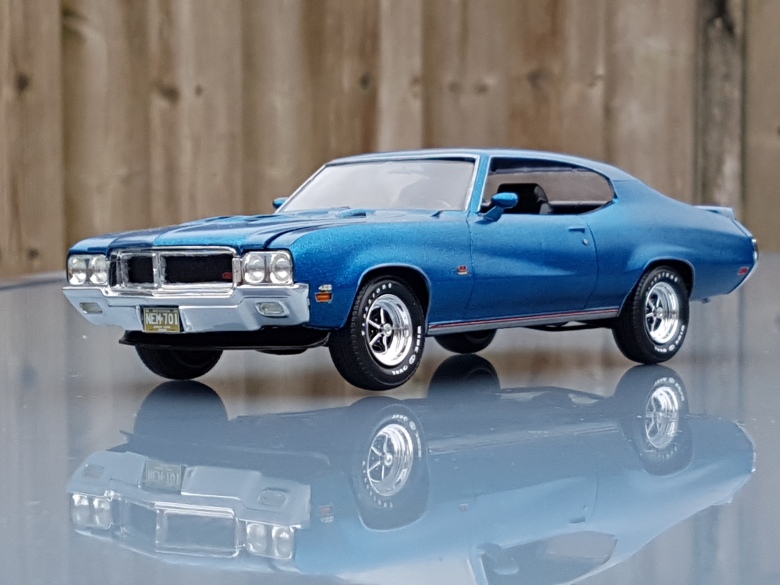 Obviously it’s never really been settled, in some cases the GS beat a HEMI powered car like a ‘Cuda, GTX, Charger, other times it got beaten by them instead. Hell some even just went with the “it comes down to the driver” mentality, but still being mighty upset about the idea that a Buick, with cars most commonly known for being boats on wheels, the mid ground Cadillac, kicked Chrysler’s ass. 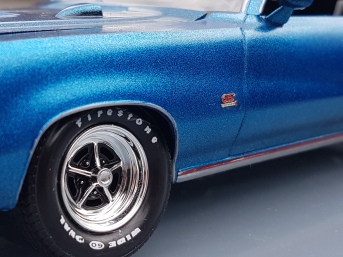 And besides the GSX‘s decals and brightercolors, the GS Stage 1 is a lot more subtle, with only very minimal decals which are some red stripes on the bottom of the sides and a bunch of GS Stage 1 badges on the front and the fenders. The 1970 version of a sleeper, if you will. There was a Stage 2 version, which was supremely rare in its own right, so rare that Buick literally only made three. You could buy the still-rare Stage 2 engine parts to replace your own 455 parts with, but the idea here of course is a factory stock Buick GS 455, which is a boat on wheels, sits gently on an average ride height, comes with a luxury interior and still somehow it held the highest torque output record in a factory street car from 1970 until 2003 when it finally got beaten by a ’03 Viper SRT10.

These cars fascinate me to no end. I’m European, so I think I got this natural ability to not pick sides and evaluate things from a neutral point of view and God’s honest I love Plymouths equally to anything. But yeah, I could believe a HEMI equipped GTX may be a shred slower than this thing based on the booklets, the test drives, the heated versus sprint races, so forth. But to hell with the controversy, Buick’s legacy and Plymouth’s legacy both went to hell in 1974 when the first giant oil embargo crippled the US vehicle industry and brought in stricter regulations, which officially marked the shotgun-to-the-skull for the muscle car era. So in the end, sadly, neither Chrysler nor GM had the opportunity to use the seventies to duke it out for good and bring in the final victor, as the Skylark Gran Sport model was shelved indefinitely in 1974 and the GTX sadly already saw its last daylight three years prior.

But back to the kit at hand here, Monogram first brought the wonderful Buick GSX to light in 1988 and it’s been largely unchanged since then. It’s seen a few re-releases here and there, split off into two distinct releases: the GSX in ’88 and again in 2012 and the “Street Machine” 2-in-1 release that got released in ’89, ’97 and ’07 which included a giant cut out in the hood with the engine sticking out and a set of custom wheels. Plus of course more decals, which is a given. 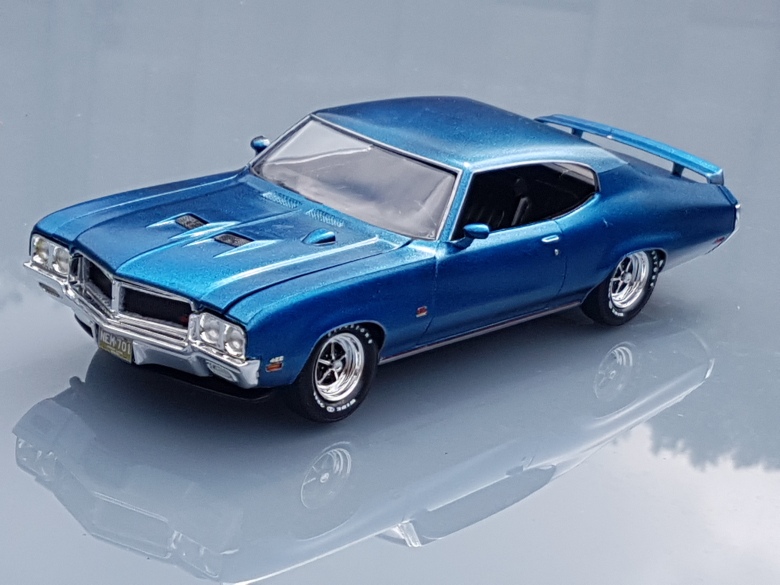 Two years back, one of my first models I built was the GSX. This was at the time when I decided, yeah you know what, let’s build a couple more! So it was… shoddy, not that I would ever say I gotten a ton better since but I’ve marked some improvement at the least. In 2015, I came across a German with a 1971 Skylark GS in dark blue metallic who claims he had actually driven the thing on the Nürburgring for whatever friggin’ reason. At my workplace, we tear apart imported American classics(from 1978 onwards, getting big block V8s into Europe was a trend it seems, we seem to be getting mostly 1978-1983 imports) daily cause some twit decided it was funny to take a barely steerable 1974 Firebird down a local race track. 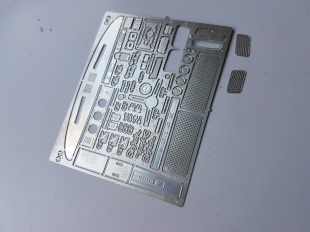 But I digress, the point I was apparently trying to avoid so damn well was that the color just… I loved it. To be fair, no muscle car looks bad in a coat of metallic blue, be it a light shade or a dark shade. But this one had this deep almost black undertone to it, only the metallic flakes seemed to reflect light and only by that you could tell it was in fact blue. So I took that paint job, made it a tad more blue cause otherwise, well, I may as well just make it black given the model stands inside 99% of the time. Then I bought myself a photo etched detail set for the Skylark from Model Car Garage and immediately began digging out the hood vents and grilles to replace with the PE parts.

It’s a given that none of the Monogram releases of the 1980s are flawless, they’re largely awesome with one or two faults that’ll nag you for days. For starters, the ride height. God, fuck me, the ride height. You see, the entire rear suspension of the model is decided entirely by two coil springs. It’s this awful support system where the suspension arms rest on the two coil springs and it completely screws the ride height to hell. It’s basically a Goddamn lowrider thanks to that. I should’ve seen it coming but I honestly couldn’t think of a way to raise it without bending the two tiny arms to adjust with the rising of the springs, which believe me would’ve snapped at an instant. Even on the box art it sits like a frickin’ lowrider, so it ain’t just me! 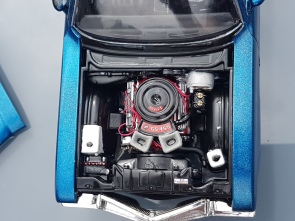 But screw it, fine, it sits like a Californian wants it best; on the floor. The other? Well, the gorgeous(and I do mean, gorgeous) engine is kind of overshadowed by some fitting issues. The two tiny arms of the chassis are meant to take on the entire engine block, but the exhaust manifolds get stuck on the A-arm(or wishbone if you will) suspension and the oil pan gets wedged stuck in the chassis before the little arms can reach the supports. 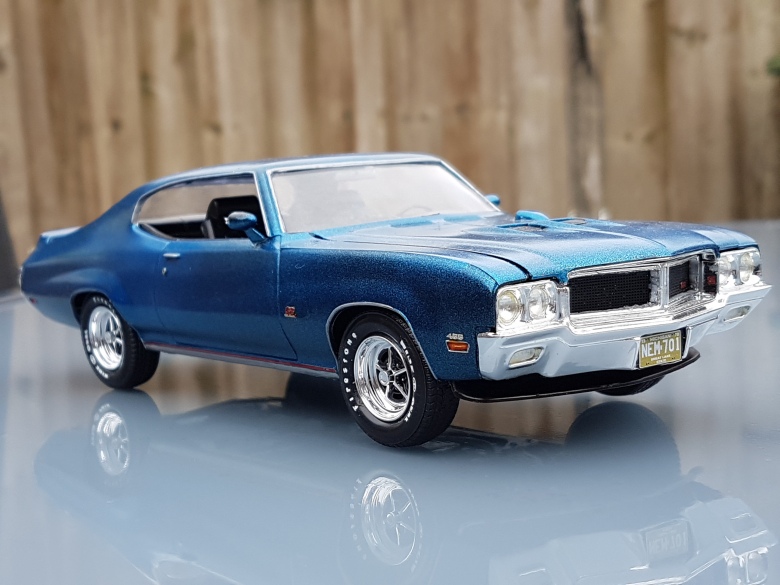 Still though, other than that, it’s a perfectly fine kit. Hell, underappreciated even. I aughta re-build the GSX again some time to give it the detail it deserves, try and fix the ride height properly by maybe kitbashing a different suspension set. Either way, with the beautifully recreated 455 cubic inch V8 engine, the stellar interior(that sadly doesnt get dial decals, damn!) and beautiful casting work of the body and bumpers, it’s just one of those kits that despite the problems, is always worth building and going through the extra effort for. It’s just that good. (Updated Dec 12: Fixed the ride height with some plastic bits, now it sits goooood) 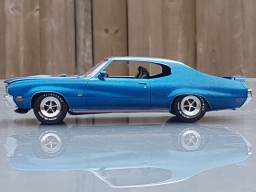 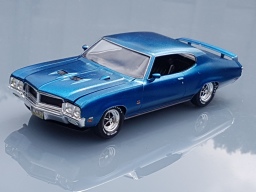 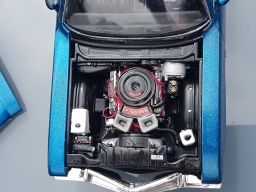 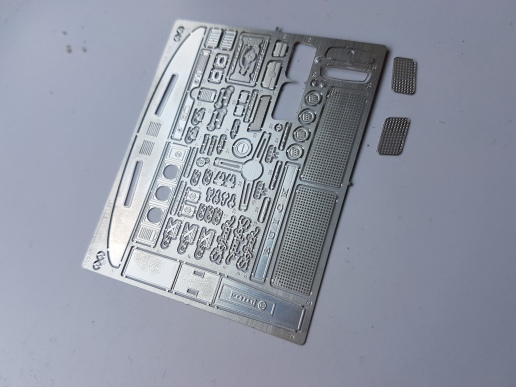 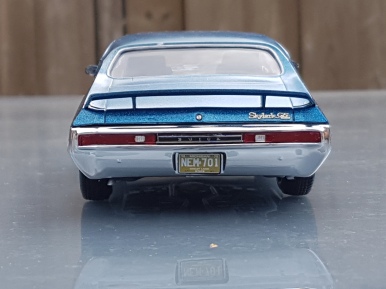 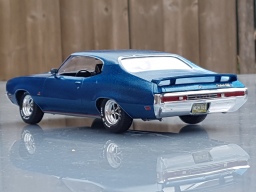 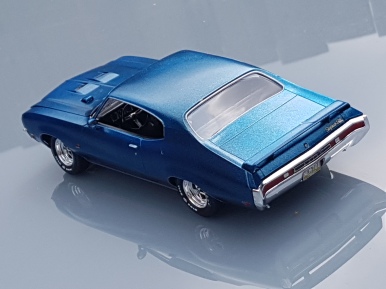 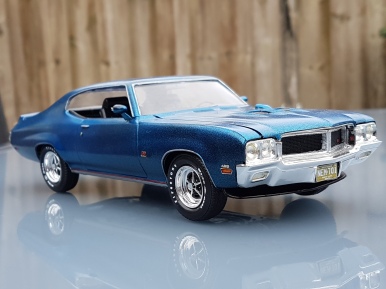