SUV and pick up truck kits are few and far between, and even then they’re of wildly varying quality at best. From the simplistic yet well produced GMC Sierra and Dodge Ramcharger, to the highly detailed and excellent ’93 and ’95 Chevrolet S-10 and of course the GMC Syclone. But then, weirdly enough, there’s kits like the one here – the Cadillac Escalade. Revell’s put out two of these kits over the years, one in 2002 along with the release of the technically second generation of the Escalade and the one I have here just a short two years later. The regular Escalade, even though Revell put out a ’06 Escalade EXT(albeit as a custom version) in 2007 and AMT themselves did a stock EXT at one point, no ESV sadly.

But, technically the second generation of the Escalade? Well, apparently there’s a direct clone of the 1999 GMC Yukon Denali to compete with the ever successful Lincoln Navigator – a big ol’ SUV with extra options, a big ol’ V8 engine and seats so comfortable and luxurious that wouldn’t be out of place in a opera house. In 2002, the Escalade was finally allowed to be its own player on the field instead of dressing a old one up in new clothes and it turned out to be a huge success! Over one hundred thousand total sales from ’02 through ’06, when the updated model was revealed.

I always, always adored the Escalade. Ever since I got to play Midnight Club 3: DUB Edition back in… what was it, 2005 I think, I loved the Escalade. It featured on the box art in vermillion red metallic with these giant TIS-04 wheels and while I utterly hate how lowriders can truly ruin a car or how Hollywood loves to turn SUVs into everything they shouldn’t be – there’s just something about that one that clicked with me. I ended up going with metallic black cause the spray paint merchant I always shop from didn’t have vermilion red in stock at the moment but I will definitely have to buy it regardless for the ’12 Chevy Cruze and the eventual ’05 Escalade EXT that I am gonna buy and build sooner or later. 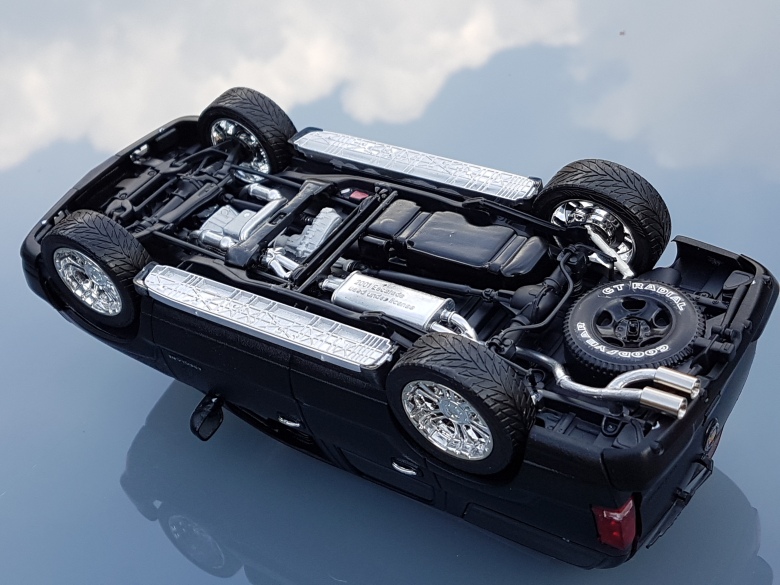 Though unlike the EXT kit, this one doesn’t have a engine. The only semblance of a engine is on the extremely well detailed bottom side. The chassis is so utterly well detailed that it kind of hurts – there’s obviously a ton of dedication done by the creators of the kit, why would they skip on the engine? Too costly to tool a 5.3L Vortec V8? It’s just… such a goddamn shame. I have to admit, a lot of the sadness lies with the Escalade EXT kit having a full engine and engine bay detail, but alas I’m just droning on now. 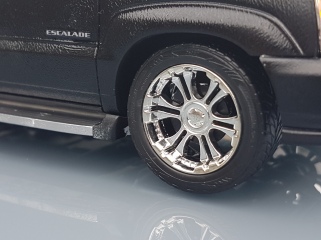 The other extremely nice bits of the kit lie with Revell’s dedication in making this kit friggin’ epic. Tinted windows, for instance, a thing the real Escalade has by default much like many of the luxury SUVs and this kit supplies tinted windows for the rear doors, rear windows and trunk window and clear for the rest. It comes with two sets of custom wheels, one set’s a wire dish wheel and the other are these half-DUB Cyphen S745, half-TIS 04 looking wheels. Hell, maybe they’re properly licensed, I wouldn’t know, 20 inch plus SUV wheels isn’t my area of expertise sadly. And with ’em come these really nicely detailed rubber Toyo Proxes tires that feel as close to the real thing as they can get, like it’s up there with Aoshima and Tamiya tire quality.

Something else that’s a rarity among model kits; functional trunk. Though it was briefly a common thing on the California Wheels and Uptown series of Revell kits, like the Chrysler 300C, Cadillac STS-V, Dodge Magnum and so on, they had functional doors or a functional trunk or in some cases even both. I dunno, generally I don’t really care but with the luxurious nature of the Cadillac obviously the interior is something that needs to be taken care of and seen. It’s also partially due to the 2-in-1 nature of the kit, as one half of the kit also has these giant speakers and subwoofers in the trunk instead of a bench seat, even though it does come with the bench seat as you can see on my take on it.

Despite the utter lack of a engine, the kit makes up for that by shoving detail elsewhere. As I said, the chassis got a massive amount of love but the interior is no different. The quality of the seats, the seatbelts on them, the dashboard functions, the ceiling TV screen, the consoles, so forth, they’re all crisply detailed. Plus a good solid amount of decals to bring the extra detail out some more. What I truly love about the interior of this kit is how it’s put together; you build essentially the entire interior frame onto the chassis with the insides of the doors and walls and you slot it into the empty body shell and they both connect like a friggin’ puzzle piece, absolute perfection. The ’06 Dodge Magnum kit has a similar interior construction and… it’s just so solid and it goes into the shell so damn well that I honestly think this is how they should do it more often!

Though of course, not many cars are as padded inside as Cadillacs… It’s like triple brick walls in houses up in Scandinavia in there. But to carry on about the positives here, the rear end of the car is also just stellar. The headlamp housing is slotted inside and connecting the tail lamps isn’t awkward as all hell for a change, plus bonus points to Revell for individually segment the reverse lights! No need to use a silver marker for once plus it looks a thousand times better for a change!

So… onto the less than stellar. Well, first of all, the way the kit’s packaged without any supports for the body, especially the rear end, it’s super prone to warping. Mine was bent inwards a fair amount and the grille had cracked and according to the delightful folks over at model kit forums I found out that I wasn’t the only victim. The other downsides? Well, it would’ve been nice to have stock wheels… I wouldn’t have used them, but they did shape them for the chassis, would’ve been nice! I know it would require extra rubber tires and all that hassle but y’know, I can dream right!

And while the decals are subtle and let some nice real world licensing show through(like the Steve Foley Cadillac branded plate, nice one Revell), they were incredibly frugal with the decals for this kit. Two thirds of the sheet are the ugly-as-sin flame decals, the rest is Cadillac and Escalade emblems, oil pan sticker and the interior bits and while I won’t be asking for duplicates(even though AMT is beginning to make it a custom to include spares, thank God), just two Escalade scripts even though there’s obviously three on the car? No center console decal? I mean, it just would’ve been nice. 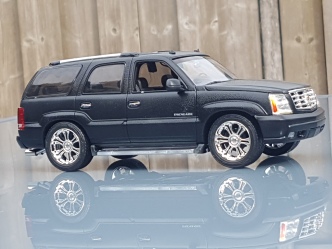 But meh, at least for the little issues and downsides and the kit having no engine, it was well worth it. Well worth it. I love building SUV and pick up truck kits every now and then and having a Cadillac with the collection is a hell of a welcome sight. I still would kill for my personal favorite Escalade, the ’15 ESV with the long tail lights that looks like a Volvo 850 Turbo from space(that’s a good thing!) but, hey, maybe some day. The kit inspired me to look for the Escalade EXT and get that thing going in vermilion red metallic so it can join it’s shorter brother. Serious props to Revell for this one. 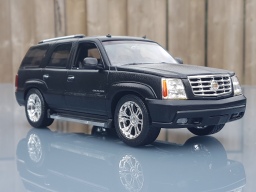 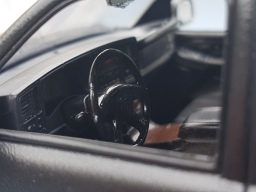 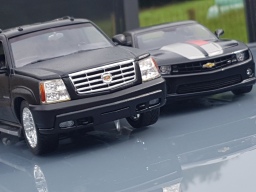 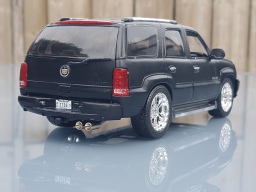 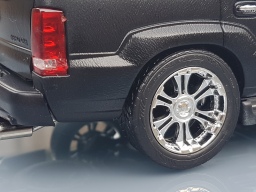 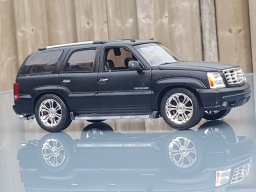