Back in 2005, the Dodge Charger came back from its 20 year hiatus, or 32 year hiatus if you don’t count the dressed up Dodge Omni from ’81-’87 or the Chrysler Cordoba badge-swap from ’75-’78. And it was quite a success, hell it still is. It became a very proficient police car for a lot of townships, it’s a solid four door semi-luxury car that sort of echoes the original days of the Charger plus it’s actually… pretty damn sexy looking. And speaking of echoing its past, Chrysler was on top of it something fierce – just a year later, at the North American International Auto Show they showed off a SRT8 with a Super Bee livery(on which this kit is based), a while later it turned out the production model would be a little different but we’ll get back to that in a moment. 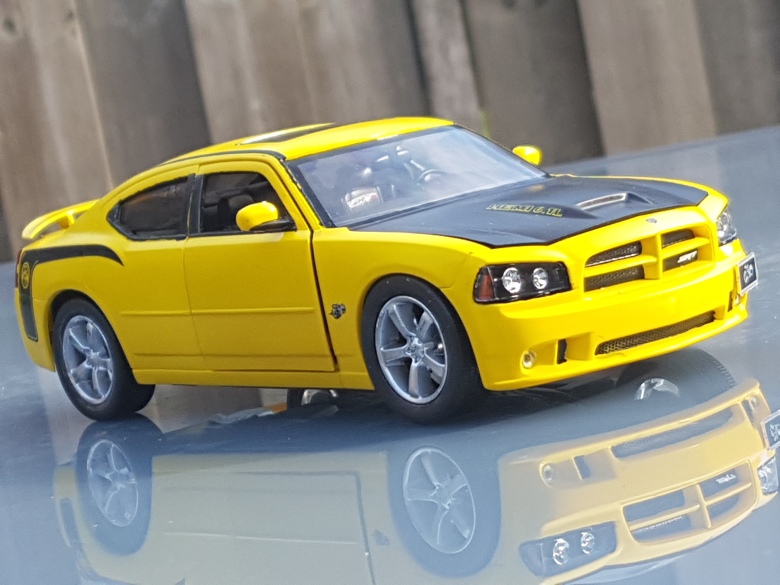 The same year, a very similar looking Charger Daytona R/T was announced at the Chicago Auto Show, also for a limited production run(though it would return a bit later in 2013, as would the Super Bee in 2012), it was basically one big giant nostalgic orgasm for car lovers around the globe and Revell leapt on this hype train like it was gonna miss its one last chance at life in 2005. First coming on the market, weirdly enough, as a “Uptown” series lowrider… custom… thing? I mean, fair play, the DUB Magazine crowd just about pissed their trousers with happiness that there was another contender for the transmogrification crowd.

I’ve said it before and I’ll say it again, I despise the way it looks. The giant wheels? Fine, after all, I am a fan of the “Dubbed out” ’05 Escalade. Hell, I can even appreciate them some on the Charger with the right stance. If the top of the rubber is still visible, it’ll likely look okay. What I am not okay with is the weird, silly, stupid scissor doors that were a freakish hype item in the mid 2000s and are a relic of the lowrider days. It just looks fucking idiotic, pardon my français. And the main reason why I don’t like the way it looks on model kits especially, is something you can see above: the extra moving parts, inner door parts and the whole mechanism of it going up require a lot of space and the door won’t ever properly look shut anymore.

The 2008 re-release of the kit as the Super Bee prototype, it didn’t see much of a fix. I would’ve much preferred just molded shut doors but… yeah, that would require editing the whole model for what came down to just a set of new wheels, a wing and a new decal sheet. All I would’ve asked for is some damn door handles. It looks so alien, so weird, without ’em. I know, it’s a nitpick worthy of a slap but Jesus Christ, why does it look so odd without them? I’m getting the same vibes here from the lack of door handles as I would seeing pictures of folks with their eyebrows Photoshopped out. It’s just unnatural! But I digress, holy shit do I digress. Actually, to quickly go back to the original 2005 release – you get all the pieces besides the wheels in this kit too. The decals are there, the Xzibit Approved™ TV screen and sound system interior accessories, chrome interior panels and plaque for the rear deck. So you got that going for ya’ in this version.

Earlier I said that this isn’t actually the right Super Bee that people actually ended up getting on their driveways to gawk at. No, sadly, or actually, impressively enough, this was based on the 2006 announcement prototype with the solid stripe and all black hood with yellow HEMI logos. The one that went into production had segmented horizontal stripes and merely a black logo on the hood, turns out either way – the car(not the kit. Thouuuugghhh…) was… unconventional, at best.

Most of the complaints went to the car’s usability. For instance, the damn thing didn’t turn normally if you even as much as touched the gas pedal(or rather, it only turned when you did that). The whole interior is made of a plastic that shatters if you as much as sneeze in the car and it did the convenient thing that turns out being inconvenient on any road outside of long highways of putting a ton of useful stuff on the steering wheel. But ironically, while they really wanted to improve the car while keeping the spirit of the original car – they literally made the original car. A 440 Magnum powered 1971 Super Bee was unbearable to drive apparently, with today’s standards in mind of course, you’d be able to turn left or right by merely hitting the gas pedal, the decals were often matte or low quality, the brakes being made of tin cans and hope and the interior quality was usually dubious at best. And why were those cars so… absurdly difficult?

Cause they were fun! Fun fun fun! Purpose built for the child like of heart(yours truly included), burning rubber for no reason whatsoever until the steel belts came flying off, annoyingly bright paint job with decals that got the attention of everyone and the sighs of “ugh, friggin’ douche” quickly followed. The big 6.1L V8, also known as the Street & Racing Technologies’ V8 HEMI – it pumped 425 horse power into a car that (curb)weighs as much as a loaded up ’06 Dodge Ram Van 1500. That does explain why the car has a tendency of going all over the damn place besides forwards, it’s a ton of power nestled onto the wheels and the immense amount of torque that giant V8 shoves out is just too much for the car, but holy hell does it make for a fun little toy. A toy that costs close to fifty grand new, but… y’know. Yeah okay, that makes for a rather shit toy, but the sentiment stands, dammit. In 2007, the Camaro was still two years away and the Challenger was just announced so this trip down the lane of memories was all you could get if you wanted that itch scratched.

So why is this such a mediocre kit that has such a extreme duality in quality? Well, it goes back to the problem that it is a custom. They obviously wanted to get rid of the custom part by giving normal tires(well, as normal as they could get, the real thing sat on 20 inch wheels) and the parts to make a regular interior out of it. They just never truly pushed through on it, keeping the scissor doors, lowered ride height and more Snap-Tite build quality. For instance, nearly all the moving parts and chunks are screwed together, something I am a fan of – it works a lot better than glue and it won’t ever fall apart unless you physically unscrew ’em. The build itself is also immensely simplistic, the engine bay is two pieces. Just two. The interior goes up to about twelve. The trunk is two pieces. Stuff like that. Though that doesn’t mean its bad, in fact the simplistic nature of the kit is wonderful, it goes together so friggin’ well thanks to it.

For instance, parts where it ain’t all simple or where it benefits of the simplistic approach: the headlights are literally just the chrome lamps and indicators, which makes it a thousand times easier to get that blacked out headlight effect the real thing has. The bumpers are all already part of the body and just the grille needs to be fitted, which makes for a more smooth body – which of course is utterly negated by the stupid doors. The simplicity of it all hasn’t affected the mold detail at all, the whole engine detail is there, it just isn’t there to be build by you. Same goes for the interior, it’s all high quality – just hardly any building required. Decals enhance the whole ordeal a ton too, but I would’ve liked a full bore 120 plus piece kit instead of this.

The really, really nice things of this kit though is something that was sort of a trend during this period of Revell. Tinted rear windows, superb quality almost puzzle like pieces that fit together so well. Actually, all but the trunk which uses a mechanism that would imply it could go open without any issue but in fact it’s just properly permanently shut due to it. Lots of little structural improvements that enhance the build even more, like the headlamps having little pins that go through the headlight bezel and can be glued stuck from behind, the tail-lights have a similar thing, all windows have special slots and prongs that allow for extra strength. Little things that help a ton, something that could be found on the ’05 Escalade too as well as the ’06 Dodge Magnum I got coming up sooner or later still.

In the end, it’s just such a weird cross-over. It’s not custom enough to make it truly custom like the original 2005 release, yet it’s also not stock enough to truly make it a ’07 Super Bee prototype. Speaking of which, if you’re looking for the proper decals instead of the NAIA show version, Keith Marks has a set of ’em for fifteen bucks. I would’ve done it proper but… when I figured out how “custom” this kit still is despite it all, I just didn’t want to invest any more. It ain’t bad as it is, but boy did it leave me wanting more. 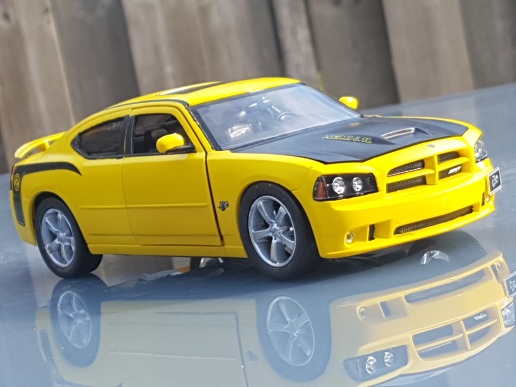 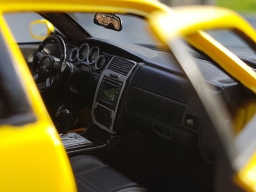 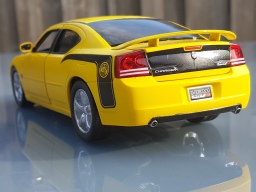 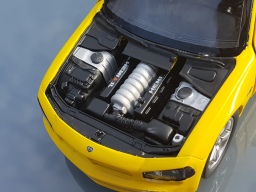 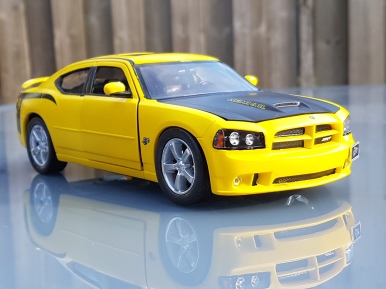 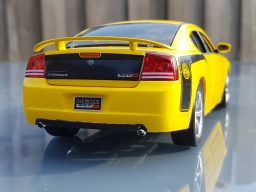 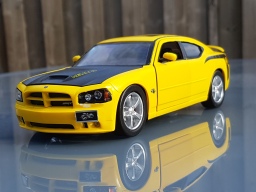 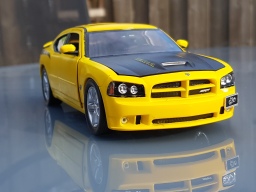 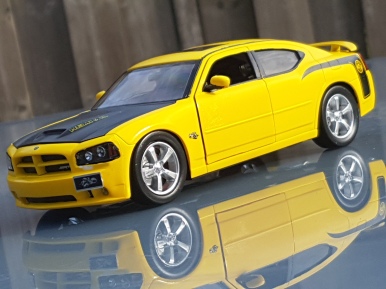