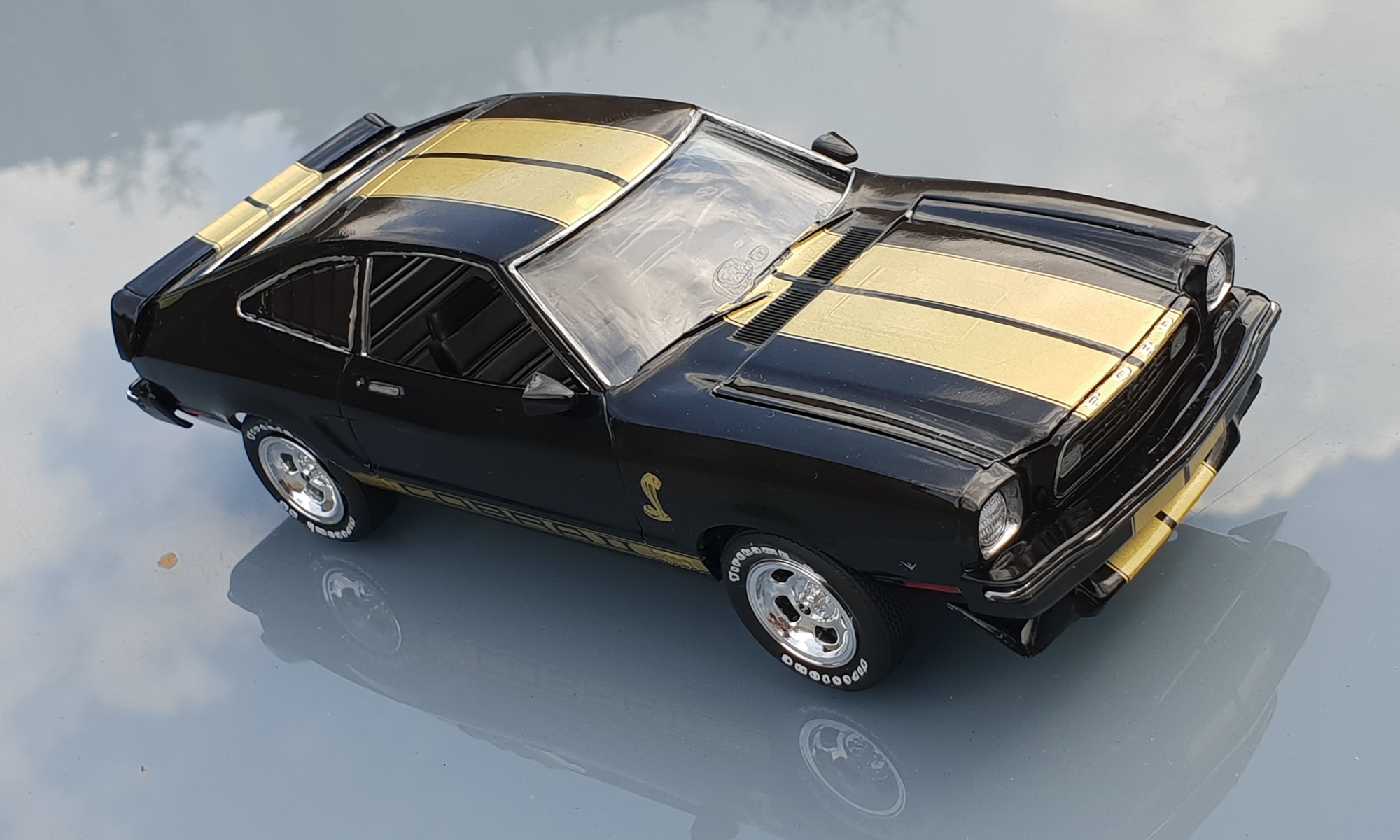 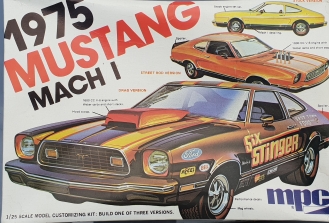 In the article for the ’77 Mustang II by AMT I pretty much lamented the whole time that I wish I could compare it to a MPC kit and see how it holds up, cause I stumbled upon the realization that the AMT kits of yore were kinda slightly not entirely great, especially when held up to another similar product. And whaddya know, I got a hold of a similar product to compare it to! From the get-go I really, really just wanted to make a Cobra II model and just couldn’t ever get a hold of the appropriate Cobra II kit so I improvised by buying a Missing Link resin set for the MPC Mustang that mimic the parts from said kit so I wasn’t utterly screwed from the start on my little plan.

Then around the same time I was designing the series of Mustang II decals among which the Cobra II so I had one printed in nice metallic gold as in my personal belief there’s only two downright beautiful Mustang II’s: one is the simple two-tone Mustang II Ghia and the other is the ’76 Cobra II in either all white with blue stripes or all black with gold. Cause, with all due respect, the Mustang II isn’t ugly. Not ugly per se, it’s a situation of ugly birth riddled with abusive parents, family and it wasn’t until it grew into its proverbial pants that it could shine once more as a fox body after being kneecapped in 1974. Judging it purely by looks, despite it being a Pokemon evolution like ordeal from the Pinto, it’s not half bad. Yes compared to the ones it once rivaled, the Javelin, the Camaro, the Firebird, the Challenger, so forth… Yeah, it looks like a jellybean that was left on a dashboard on a hot summers’ day, but again – it’s not necessarily ugly.

As I said, in this rigorous defense of the indefensible, man what a hill to fuckin’ die on huh – the Mustang II originated from inside bickering, indecisiveness and of course good old fashioned panic cause of changing times. In the previous Mustang II article I described a scene in James May’s Cars of the People where he takes a few old employees of Ford, GM and Chrysler to drive in basically primo-Malaise era Mustang goodness and get their take on why it all just fell the fuck apart back then and the simple conclusion was lack of change – innovation came about slowly and no-one really cared for the sheer, utter greed these cars symbolized. They drank copious amounts of fuel, had more lengths of sheet metal than most boats and lets not overlook the grandiose idea of putting friggin’ lead into everything. Lee Iacocca, the grandfather of the Mustang way back in 1964 was also poetically the saving grace of the Mustang in general, he greenlit the downsized Mustang project for 1974. They literally were gonna bin the Mustang as it was to turn it into sedan very much how the Mercury Cougar started out and turned into a land yacht of luxury in 1975. So the project had one of two choices; turn it into a smaller, more Maverick-ey powerhouse of joy, or just… kill it. So this is where apparently we should stop drawing parallels between the Mustang and Camaros, Firebirds and whatnot and begin comparing the Mustang’s overall “decent-ness” to and get this; Chevy Monzas, Toyota Celicas, Mazda RX-3s, Ford of Europe’s Capri II and so forth.

And that’s exactly where it went wrong and right at the same time, it once was the definition of a pony car, the quintessential muscle car and much like a one hit wonder rock star, it got yanked off stage and given a serious talking-to in order to get the thing to have its shit together. It began playing on a smaller level again, half the weight and size of what it was the year before, all the while its former competitors literally died off or carried on stronger than before, and that’s where the “wrong” comes in from before. The “right” was doing a drastic measure to save the Mustang from becoming a vapid shadow of itself, the “wrong” was not sticking with its guns. You see, the Camaro and Firebird had some changes but largely they stayed heavy-weight big-block powerhouses, all the way through and the Firebird especially. They kept high performance versions all the way through the seventies, largely no different from their pre-1973 offerings, just bottlenecked as all hell horsepower wise, but even from that they recovered by 1978.

By 1975 the Mustang II was slowly growing back into its old self(despite its most successful sales coming from the bare bones Mustangs), getting the 302 V8 back, albeit at an absolutely anemic horsepower output. And in 1976, the first of the so called “Decal GT” cars began appearing. Being largely unchanged from the normal Mustang bar for some appearance stuff, the Cobra II was literally the least sporty “sports” car out there. It was basically the car equivalent of a overweight fellow in a velour jumpsuit. Don’t get me wrong though, I’d argue its the prettiest of that generation Mustangs, cause holy shit they went all in with the 1978 Mustang II King Cobra and it became a hideous amalgamation of body kit, stripes and stencils, shopping cart wheels and the amount of cobra bite equal of what you’d find in a plush toy. That being said though, I find it amazing nonetheless and am doing a decal sheet for it as we speak, but I digress! 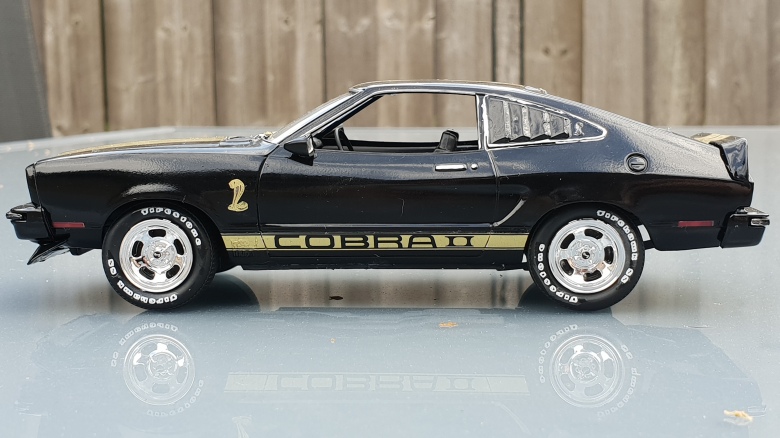 The wrong that the Mustang II committed was simply that they were not changing enough in either direction, they just weren’t accepting that the Mustang had died and needed a rebirth, either as the now ultimately hyper successful basic Mustang II or the power-wagon V8 from days of yore. Cause in the end, the AMC Gremlin was a better compact alternative(even Ford’s very own Maverick was too) and for old fashioned muscle you could just glean over to Chevrolet or Pontiac. They stalled for time for four years and didn’t gain any serious ground whatsoever on reclaiming the old Mustang name and spirit until 1979 when shoving a turbo onto everything and anything had Ford experimenting with smaller engines and maximizing their output via turbos. To be fair, it had some severe teething issues but it did pave the way for the stupidly successful and loved Fox body Mustang.

But enough lamenting on the Mustang II’s existence. Back to the comparison, the AMT and MPC bodies are different. Very different. First of all, the AMT one is definitely the one pulling the short stick, it has deep sinks on several parts of the body, the assembly is nowhere near MPC’s and in the end, the whole interior was a silly afterthought to them, being flat and un-detailed to say the least. The shape is also… worse? I dunno, it’s in the eye of the beholder but I’d argue at least on the tail end and the grille especially the AMT one is far less accurate than MPC’s offering. The biggest sinner remains to be the wheel size on the AMT kit, which is hilarious to say the least. Engine-wise again it goes to AMT for having the worse of the two, though but no means a lot – the V6 engines offered in either kit are actually really neat, and it’s the V6 offerings that usually go completely unloved so its nice to see two nicer castings out there.

Though yeah at the end of the day, the AMT kit loses out on just about every point – the MPC Mustang II kit is just miles ahead of the other, with just basic things being better like the tail lights being translucent and the quality being finer on the grille, steering wheel, so forth. But also in terms of the engine bay and interior, the MPC still lies far, far ahead. The quality is sharper, more accurately shaped scale wise and it just looks… right. It’s got hardly any flat detailing due to “who’s gonna see it anyway”, they put in a good effort. Today though, this is a unfortunate thing as the only thing that was re-released at all in the last decade or two was, you guessed it, AMT’s Mustang II kit. The MPC one, like so many, probably got changed to fit some horrible funny car design or pro-stock AWB tool and was irreversibly changed to accommodate those changes. Could also be that like the ’75 Dodge Dart it just lies in hibernation somewhere until someone’s like “Yeah, give that sucker a whirl, whatever right”.

So, the biggest issue I had with this kit was the tires. They, much like everything back then, were just tossed in the box. Even though they were sort of rubberized and really, really nice for the time, they also had a horrible habit of melting into the plastic over the many years they’d lie untouched. Mine decided to mate with the windshield, rear glass and part of one of the seats and took some digging to get loose from those parts, so unfortunately I had no tires for this model. I did however have access to a nice little Ford Pinto kit with the mag wheels that were actually on a proper ’76 Cobra II! So I stole those tires and wheels and slapped ’em on there no problemo and of course, they were one-size-fits-all so they went on with hardly a bit of hassle. Put on the set of Firestone Firehawk SS decals I had prepared for ’em and done!

Like, this is one of those builds I am actually really proud of. One of those cases where everything kind of just came together really, really well. The decals sit beautifully, the body kit from Missing Link I couldn’t have done without, the perfectly fitting Pinto wheels, so forth. 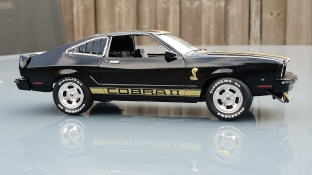