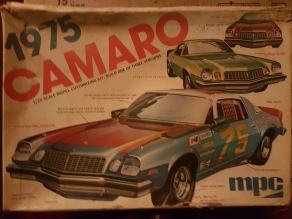 So, last year I built the ’76 Chevrolet Camaro that was done by AMT back in the seventies. Specifically, it was somekind of one off version done by American Hatch Corporation in 1976 for the 1976 and 1977 model years called the Camaro AHC-100, where they did some… well, there’s no kind way of saying it; half-assed rip off of the more popular and more desirable Pontiac Firebird, the Trans-Am even. It was a truly weird set of choices made by AHC, the odd egg-shell off white paint job, the weird(albeit totally 70s) color choices for the bird on the hood(that they so eloquently called “the Black Bird”), the stripes that didnt follow the curves of the Camaro, the ugly font for the AHC-100 call-outs, it was just a strange, strange thing. Though it was the earliest example of a semi-licensed Camaro with T-tops, so there’s that! 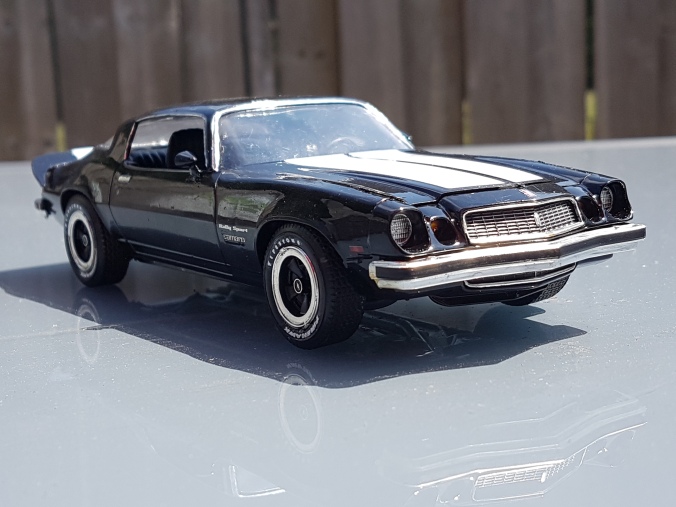 And I now truly regret not having made it the AHC-100, instead I half-assed this 1976 Camaro together with a Z/28 inspired thing going on from 1974… So I effectively doubled down on the weirdness factor. Though, that being said, now that I have the 1975 Camaro done by MPC, I can conclude quite easily that the MPC version is not only twice as good as the AMT version, it’s actually the most accurate mid-seventies Camaro kit out there. I always felt that something was off about the nose of the AMT version and having the MPC one in my hands, I could easily spot it now – the headlights aren’t just misshapen on the AMT kit, they’re nowhere near as deep as they should be. 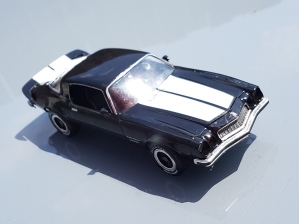 I bought the kit for two reasons, one is that I desperately wanted an accurate Camaro kit to design the decal sheets off, two was that I desperately wanted a damn good Camaro kit. And well over a year later, on eBay I accidentally stumble over a second hand Camaro kit from 1975, the box all ripped and quite frankly, rotten beyond belief. But whoever had this thing sitting around since 1976, did me a big solid. He unpacked it, clearly but he then put the parts(that were all just in one giant soggy bag) in separate baggies and… just left it be. I am 100% certain that the baggies that he put them in were at least 30 years old as even under cardboard they’d turned a nice shade of smokers’ beige. But this prevented the typical 1970s kits woes; the rubber wheels melting into the plastic parts and the clear plastics turning into a misty milky white. 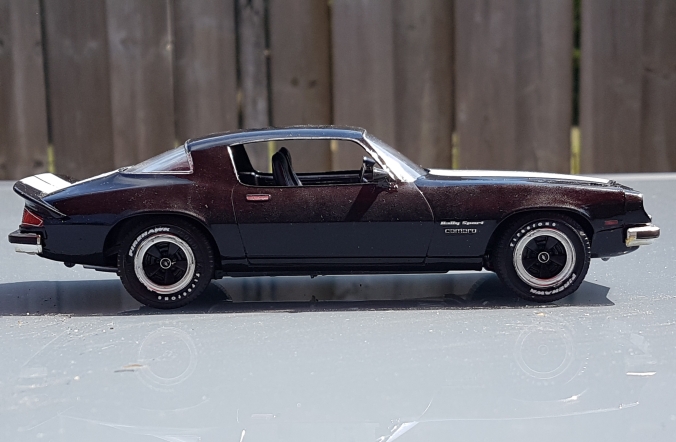 However, the decals had gone totally off. But who gives a shit, they’re MPC graphics from the 1970s, they at best had some Hooker Headers and Hurst logos and a few NASCAR inspired door numbers. Shrug! Gotta do a little D.I.Y. with these kits of AMT and MPC from back then, Keith Marks had already made the 1974-1977 sets and I did my own takes on them as well but there were no available decals to turn it into a bit of a call back to the stripes of the first generation, not to mention a hint of Bumble Bee in there. So I figured, fuck it, I’ll do it then. Added all the side-emblems for the ’74 through ’78 years and wham, there we go. Really makes it stand out, though were these damn kits a bit more common I’d have bought another one to turn it into a proper 1975 Rally Sport version. But I’d thought that with the stripes, the emblems, some Firestone Firehawk white letter tire decals and some badges I’d make it look a hell of a lot better than it would’ve been otherwise. 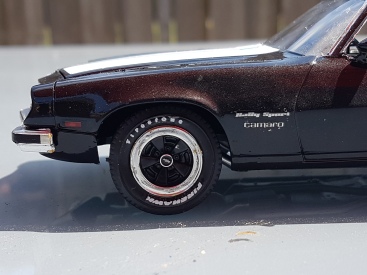 Speaking of which, “Rally Sport”, the arguably most sporty Camaro of ’75 truly didn’t deserve the name “sport” in there, did it. I mean, Jesus wept that thing had absolutely the worst and lowest power output of all the Camaros, ever. The 350ci V8 produced 155HP. There are bog standard VW Jettas with that amount of horsepower. Though, yeah, in Chevrolet’s defense, they were trying times. They were the days of unregulated growth and interchangeability. Your ’68 Camaro is starting to show its ripe age of seven years, rusting to the bolts, engine popping about like someone’s firing machine guns in there and interior trim disintegrating upon touching? Well, you’re done paying for the thing so why not get yourself a new one. That was basically how cars worked back then, they were somewhat meant to be replaceable. Bit like the iPhones and Galaxy series phones of today, we are more than willing to lay down the same amount every so often to get the newer version, so it’s not such a unusual practice. 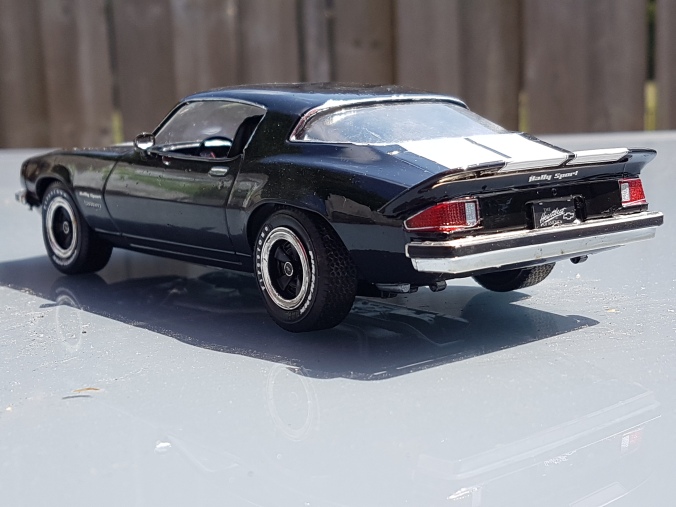 But this cemented the ideology that cars weren’t meant to last and they certainly weren’t meant to get smaller and they had no real outside competition to show them other methods. And then the oil crisis came about in 1973, and much like today, the leaders of big corporations just didn’t understand change, even if their lives depended on it – and they fell the fuck down on their knees, tripping over the corpses of abandoned big block V8s that they just couldn’t ferry off to Europe fast enough for a buck or two, cause the U.S. population sure as hell didn’t want them anymore. They had to adapt, and they tried so damn hard. Well, they tried in ways they were familiar with; lets not necessarily change the root of the problem, lets just… adjust it. The American people still wanted American cars and what they represented, just without the hassle of blowing up animals with fumes as they passed, the hassle of not being able to fill up on tuesdays and standing in queues to fill up whenever it wasn’t tuesday. 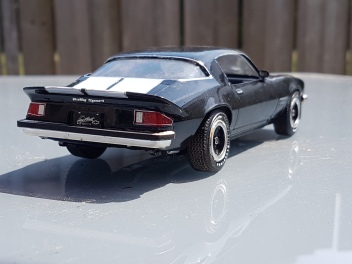 Oh well then. Fuck it, it’s called the Malaise Era for a reason. A era of falling down and getting up, falling down while getting up and just appreciating the cooling and stress reducing cold floor in the end. Cause despite the failures of… well, most the big three of Detroit in the day, the mid-seventies Camaro is definitely one of my favorite muscle cars out there. It’s the definition of a somewhat subdued muscle car, reminiscent of the 1969 Camaro Z/28, just aggressive looks and some pep and it could all be doubled down on with the stripe kits and badges but deep down it still looked… somewhat subdued. Albeit, y’know, a Camaro, still. 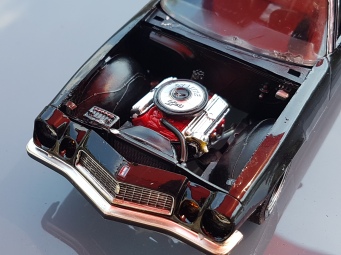 And MPC gave it a fair run for its money, the supposed “full detail” kits, which was early seventies marketing speak for “it’s not a dealer promo” were quite accurate. Even though the engine bay was very typical like all the MPC kits, even of today, barren and sad, the rest of the model like the body and the interior were quite good. Two of the definite improvements over the AMT Camaro kit is the fact that the grille and the bumper are just two separate pieces that are meant to slot into the body, so you don’t ever get that ugly ass drooping nose that AMT’s Camaro kits do get. Two is, the wider wheels that look a thousand times better than any of AMT’s offerings from back then. I was quite surprised by the crispness of the whole ordeal, clear Camaro emblems on the fenders, the tail lights quite clearly showed where the reverse lights would be with subtle patterns, the dashboard is well detailed and nicely raised, it just goes on and on. Stole some wing mirrors from the AMT Ertl ’70 Baldwin Motion kit to complete the look a little more cause they sure as hell didn’t come with the kit, or any kit from that era. The anemic as all hell 350ci V8 is nicely detailed too but it just looks… sad in the barren, empty engine bay. I did use a 5.7L Z/28 air cleaner decal on it to test it out and see if it would fit and, it did! Though of course the ’75 Camaro’s no Z/28, just wanted to test it out. 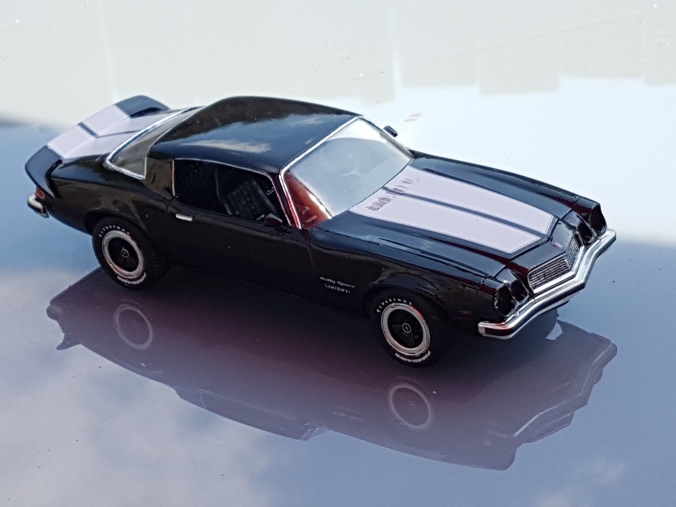 Maybe if we’re truly, truly lucky, someone someday will put the mid-seventies Camaro to a full detail release. Given that at this point it’s literally the only generation(minus the late eighties) Camaro to haven’t gotten that treatment from the boys at AMT Ertl or Revell. Who knows, maybe I’ll be forced to lay down hundred dollar plus every time for the rest of my life. Either way… worth it. 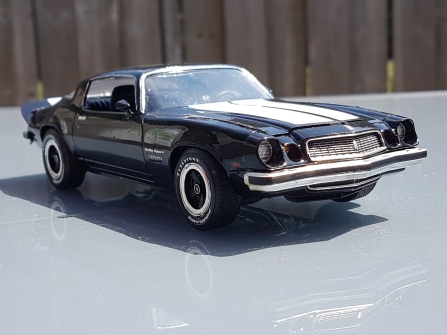 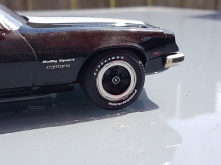 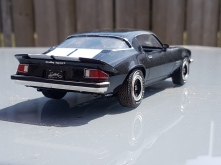 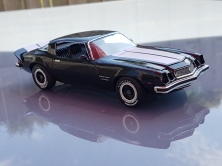 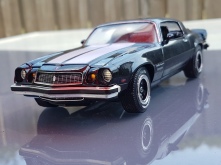 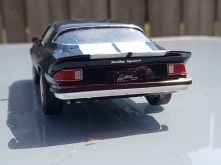 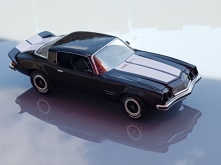 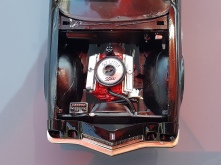 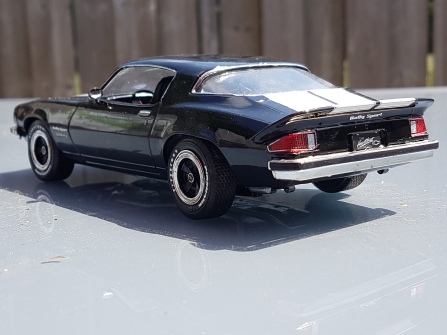 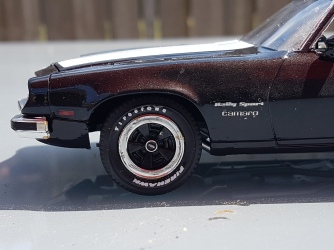 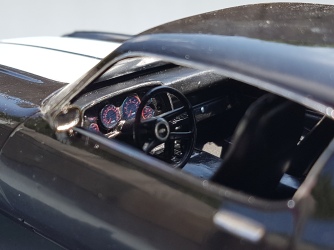 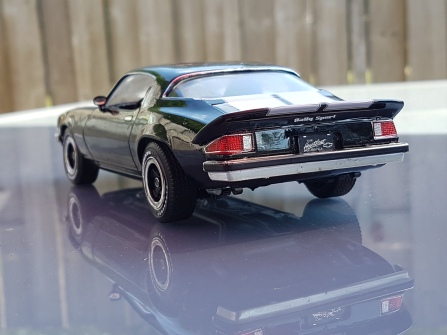 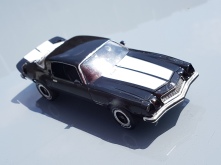 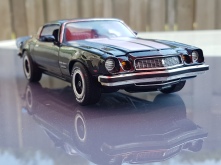 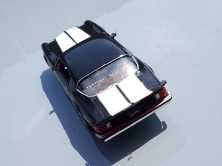 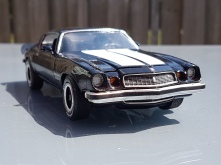 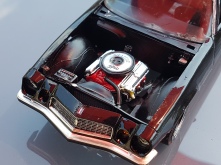